Former Lions tourist and coaching guru Jim Greenwood has died at the age of 81. [more] 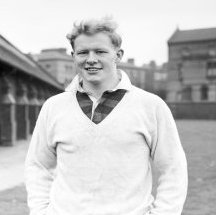 Former Lions tourist and coaching guru Jim Greenwood has died at the age of 81.

The back-row forward played in all four Tests on the 1955 Lions tour of South Africa as the tourists returned home with a share of the spoils in a 2-2 series draw.

Greenwood was a try scorer in both the first and fourth internationals as he played a starring role at openside despite spending most of his rugby life at No8.

He won a total of 20 caps for Scotland across a seven-year period and would have toured for the Lions a second time had a shoulder injury not ended his career in 1959.

But while Greenwood enjoyed a glittering career as a player, it is his remarkable achievements as a coach for which he will be forever remembered.

The Fife-born former Dunfermline, Perthshire Accies and Harlequins star was a teacher by profession and it was his ability to transfer his incredible rugby knowledge to others that set him apart from almost any before or after him.

Greenwood was a pioneer of the modern game, with his books Total Rugby and Think Rugby two of the sport’s unofficial bibles.

Known as ‘Mr Rugby’ in New Zealand, Greenwood’s writings have been used all over the globe when it comes to teaching the game to all levels.

"It took maybe 20 minutes to recognise that Jim's way of coaching was the most effective I'd come across," said Smith.

"I was an All Black then, and when I became the All Blacks coach I was into his methods, helped by his books."

Those sentiments were echoed by both Woodward, who described Total Rugby as ‘the only rugby coaching book I've ever read,’ and Robinson, who was taught by Greenwood at Loughborough University and viewed his mentor as a ‘great inspiration…who had a fantastic way of simplifying the game’.

McGeechan’s praise is perhaps even greater, with the seven-times Lions tourist in no doubt as to the magnitude of Greenwood’s achievements.

"As a student I read his books and it was clear he was an outstanding rugby thinker. He was way ahead of his time."

After his retirement from Loughborough, Greenwood moved to the village of Crossmichael near Castle Douglas in Dumfriesshire, although he remained in great demand as a rugby consultant throughout the world.

He passed away at Dumfries Royal Infirmary on Sunday.