London Wasps have announced plans for a new stadium. [more] 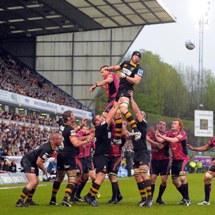 London Wasps have announced plans for a new stadium.

The 2004 and 2007 European Champions plan to move to Wycombe Air Park in Booker from their current home of Adams Park.

Wasps intend to share the new development with football league side Wycombe Wanderers, with whom they have ground-shared for the past four years.

Air Park would also host a new sports village featuring pitches for football, rugby and cricket, a racquet centre and an athletics facility. There are also plans to create commercial space, a hotel, residential development and centres for education and training.

"Investing in a new community stadium and sports village means that the clubs can develop their playing and non-playing sides," said Hayes, who also owns Wycombe Wanderers.

"This is about building something in Wycombe that we can be proud of, that will deliver a major boost to the community and which will create a positive and lasting legacy.”

Wasps hope the new stadium would allow them to continuing competing withy the very best in as they look to emulate their success under former Lawrence Dallaglio when they were crowned continental champs twice in four years.

"Having looked at the property requirements we would need to deliver the full potential of the scheme, we are now clear that Wycombe Air Park at Booker is our preferred site,” said Mark Rigby, the director for Wycombe Sports Developments Limited, the organisation set up by the clubs to oversee the project.

"It has the size, location, topography and combination of attributes that would best enable us to progress our vision, including the potential of co-location of the Air Park for continued aviation.

"Crucially, we must now await the results of Wycombe District Council's separate public consultation on the sites it is currently assessing.

"Only after this consultation has closed will we have a clearer view on how the planning process may progress."