Lions tourist James Hook is happy to put his No10 dreams on hold and pull on the No15 jersey this autumn. [more] 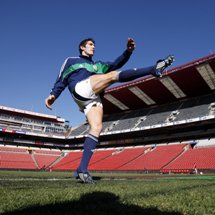 Lions tourist James Hook is happy to put his No10 dreams on hold and pull on the No15 jersey this autumn.

In a double injury blow for Wales head coach Warren Gatland, Lions duo Lee Byrne and Leigh Halfpenny have both been ruled out of the November series with hand and ankle injuries respectively.

But Hook, who pulled on the famous Lions jersey six times in South Africa, is ready to answer an SOS call and slot into the back three if called upon.

"It's the same scenario as last year when Lee was injured and I was thrown in the deep with not much experience of the position," said Hook.

"I'll play there again if I'm called upon and at least I've got two weeks training to get used to it this time."

Hook featured at full back this time last season but was then moved into the centre by both club and country.

The 25-year-old was a sensational success at 12 and 13, winning plenty of man-of-the-match honours as the Ospreys claimed a third Magners League crown and Wales picked up Six Nations victories over Scotland and Italy and then ran South Africa close in June.

He missed the summer tour of New Zealand through injury, however, and has since been linked with a high-profile move away from South Wales due to his admission that he still favours the fly-half position.

But Hook is putting all that speculation behind him to serve his country wherever Gatland sees fit.

"Being shifted around is a little unsettling but it's something I have dealt with," added Hook.

"I just look back a couple of years when I was on the bench most of the time and that was a lot more frustrating.

"I'm happy as long as I'm playing for Wales, whether that's outside-half, centre or full-back."