Shane Williams believes Wales will be the winners if fellow Lion Gavin Henson ends his sabbatical by signing for Saracens. [more] 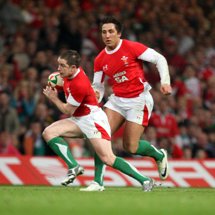 Shane Williams believes Wales will be the winners if fellow Lion Gavin Henson ends his sabbatical by signing for Saracens.

Henson, a Lions tourist in 2005, is expected to complete his move from the Ospreys to the English Premiership runners up later this week.

Williams would love Henson to return to the Liberty Stadium instead but he is convinced Henson's imminent return to the game can be a major plus for Wales.

"We'd love to see Gavin playing for the Ospreys and Wales but it would just be nice to see him playing full stop," said Williams, who played alongside Henson for the Lions in the second Test of the tour to New Zealand five years ago.

"He's such a talent that it doesn't matter where he plays. If it's with Saracens then so be it. I'd much rather see him at the Ospreys but he's his own man.

"But I've no doubts Gavin can play for Wales again. He's someone who has kept himself fit and watching Strictly (Come Dancing) he's probably in the best nick he's ever been in.

"I'd prefer to see Gav on the field than on the dance floor but, as he has said in the past, it will only take a few games until he is playing good rugby again."

Henson's potential switch to England has come too late for next month's internationals but he could be back in Wales contention for the 2011 Six Nations.

But current Wales skills coach and Lions hero Neil Jenkins has warned the former golden boy of Welsh rugby that he could face the same difficulties as fellow Lions Andy Powell and Dwayne Peel over their release from Aviva Premiership clubs.

"We want our best players playing and available and Gavin is certainly one of them," said 1997 Lions Test star Jenkins.

"But if he signs the same contract as the rest of them are on then it's not easy. If that happens then we will cross that bridge when it comes."