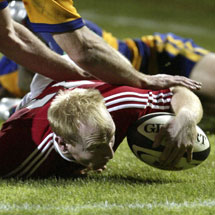 Shanklin, who launched his senior career at the north London club, partnered Henson at centre for the Six Nations titles in 2005 and 2008.

He also toured New Zealand with Britain and Ireland’s elite five years ago and he is convinced the 28-year-old will be a huge hit at Sarries.

"Saracens are not very expansive in their style, so they will be thinking Gavin could add more to their game if he's fit and got the hunger,” said Shanklin, who missed out on the 2009 Lions tour through injury having been selected in the original 37-man squad.

"Fly-half is a difficult position especially when you've had time off. But if the move gets Gav on the field, fit and raring to go, then it's a plus.

"He's probably mentally and physically right now and I just hope he can pick it up as quickly as he says he can."

Shanklin started his senior career at Saracens as a 20-year-old in 2000 before joining Cardiff three years later.

Now he is confident the club could kick-start Henson's career after 18 months out following injury and TV commitments.

"The club has completely changed since I was there but they have the same owner who is very ambitious," added Shanklin.

"They have signed a lot of big players and a lot of foreigners and have found a style they are happy with."