Sivivatu ruled out for All Blacks

Sitiveni Sivivatu has been ruled out of the All Blacks' tour to Europe through injury. [more] 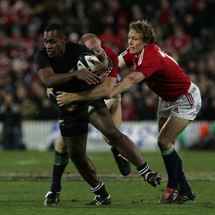 Sitiveni Sivivatu has been ruled out of the All Blacks’ tour to Europe through injury.

Graham Henry’s men are due to take on all four Home Unions this autumn, with England first up a week on Saturday.

But they will be without the 43-times-capped wing who has been one of New Zealand’s star performers against European sides in recent seasons.

Sivivatu featured in all three Tests against the Lions five years ago, scoring in both the first and second Test wins in Christchurch and Wellington.

The devastating attacker has only just fought back from a five-month lay-off due to shoulder surgery but has now picked up a knee injury training with Waikato.

“Siti had a scan in Hamilton on Friday which revealed that a bony fragment had come loose in his left knee,” said Dr Deb Robinson, the All Blacks team doctor.

“He will see an orthopaedic surgeon over the weekend and may require an arthroscopy.”

“The whole All Blacks squad feels for him and we wish him all the best as he recovers from his latest setback.”

Henry has not called-up a replacement into with Joe Rokocoko, Cory Jane and Hosea Gear in the squad as well as Isaia Toeava also available to provide cover.