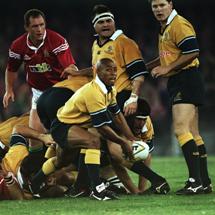 Wallaby legend George Gregan is set to call time on his illustrious career with Suntory Sungoliath.

The 37-year-old former Australia scrum-half has spend the last to years in Japan but is set to hang up his boots at the end of the season.

Gregan has done everything there is to do in the game and holds winners medals from the Rugby World Cup, Tri-Nations and Super 12, as well as being part of the Wallabies side that triumphed over the Lions in 2001.

With 139 Test caps to his name he is the most capped player in the history of the game and hopes to finish on another high with medals in the Top League and All-Japan Championship.

"That'll be me finished, though hopefully it will culminate with two championships," said Gregan.

"I am going to get into things outside rugby that I have been working on for the last few years. I am not going to do any coaching in any formal way, but the things I will be doing will be based on sport.

"Eddie called me in Toulon where I spent a year after the World Cup and asked if it was possible.

"My initial reaction was that I had no games left in me, but he told me they were looking at a time frame of three years. I had been here a few times before and have always enjoyed coming here.

"I have learned a lot. You never stop learning. The game is always changing and it's been good to see the players grow. The Top League has developed and there are lot of promising players and there has been a lot more growth.

"This season and the way the laws have been interpreted helps. There's not the same kicking numbers as before. There has been a drastic reduction since last year and it has really helped promote attacking rugby."