Morris hopes to pass on experience

Former Lion Darren Morris is hoping to pass on some of his 13-years experience at the top of the game after signing for Hartpury RFC. [more] 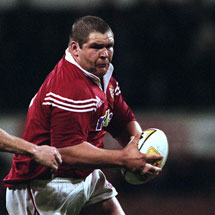 Former Lion Darren Morris is hoping to pass on some of his 13-years experience at the top of the game after signing for Hartpury RFC.

Morris made his debut for Neath in 1997 and went on to enjoy spells at Swansea, Leicester, Worcester, Cardiff and Northampton.

A solid scrummager with footballing skills that defied his frame, Morris was regarded as one of the best props in Europe and was rewarded with a place on the 2001 Lions tour of Australia. During that tour, Morris featured in six games including the third Test, in Melbourne.

But now, at 36-years-old, the 18-cap prop has moved to National Division Three South West to take up a player-coach role at the Gloucestershire club.

"I know exactly what I'm letting myself in for: rugby 24 hours a day!" said Morris. "Coaching is certainly the long-term goal, and I'm excited to work with youngsters as well as the older guys here.

"I've been around a long time so hopefully my experience will help, and I'm keen to impart whatever wisdom I've got. I'm well aware I've got a lot of progressing to do in the coaching department.

"But it's a great chance for me to bridge the gap between playing and coaching, and I've got a large part of the bargain to uphold. Any reputation anywhere in the world at any level can be smashed in a five-minute period, so I've got to maintain my levels and respect, and finish on a high as a player."

News
Previous story Hodgson hopes for a speedy recovery
Next story The Lions Down Under: 2001