Welsh international Sam Warburton has put pen to paper to commit his long-term future to the Cardiff Blues. [more] 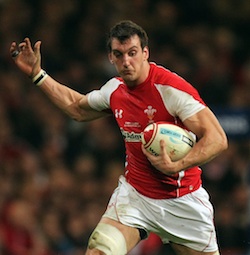 Welsh international Sam Warburton has put pen to paper to commit his long-term future to the Cardiff Blues.


The flanker has recently ousted Lions legend Martyn Williams as first-choice seven at both club and country and is a leading contender for a place on the 2013 Lions tour of Australia.

Warburton became a member of the Blues Academy in 2006 and made his debut in 2009. He has since gone on to become one of the finest openside flankers in the Northern Hemisphere and has been compared to Richie McCaw and David Pocock.

The 22-year-old was delighted to extend his stay with his home region and hopes to be a part of a successful new guard in the Welsh capital.

"I'm delighted to be staying here," said Warburton, who has won 11 caps for Wales since his debut in 2009.

"I'm a Cardiff boy, born and bred, and to be offered and sign a new deal is fantastic. I'm only 22 years old and feel there's a lot more to achieve.

"I've only been with the seniors for three seasons and with all the young players such as Bradley Davies, Leigh Halfpenny and Tom James, we've got a very bright future.

"I've come through with the same bunch of boys in the Academy and we've all progressed together so it's been quite a smooth transition.

"What is exciting is I've known some of these boys for six years already through rugby circles and there's about 10 or 12 of us who have come through within a few years of each other, which shows the systems are working.

"To be honest when I was in the Blues Academy aged 16 or 17 years old I always wanted to break through into the Blues but never knew when that would be.

"With Martyn at the club I always knew it was going to be tough. On the international front my call up came a lot sooner than I expected and the caps have notched up pretty quickly."