Hook back at 10 for Wales

James Hook has been restored at fly-half for Wales' penultimate RBS 6 Nations clash against Ireland. [more] 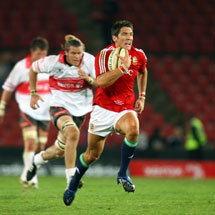 James Hook has been restored at fly-half for Wales’ penultimate RBS 6 Nations clash against Ireland.

Hook pulled on the famous No10 jersey in his side's triumph over Scotland but moved to centre against Italy in the absence of Jon Davies.

But Davies has returned to reform a mid-field axis with 2009 Lions Man-of-the-Series Jamie Roberts, while fellow Lions tourist Stephen Jones drops to the bench.

Elsewhere 2009 Lion Leigh Halfpenny has returned to the Welsh starting XV after playing no part in the previous Championship encounters due to an ankle injury.

In total there are nine Lions in the starting XV.

"This is a crucial game for us as a win will keep us in the Championship mix and take us into that final round with everything still to play for,"said head coach Warren Gatland.

"But it is also a big game for Ireland who are in a similar position to us going into this match."

Lions duo Mike Phillips and Ryan Jones will both win their 50th caps. Jones takes his place at No8 in an unchanged back row with the coaches keeping faith with the entire pack for the third fixture in a row.

"The forwards had a tough day at the office in Italy and we were not at our very best so we are looking for a step up in performance this weekend," said Wales assistant coach Robin McBryde.

"Ireland will be tough, they have a well drilled set piece game, are good around the field and are strong defensively.

"They bring intensity to the breakdown area which is always so crucial in these big games and it will be up to us to match them if we are going to be able to provide a platform for our exciting backs to play.

"The debate at fly half will continue long after the Championship is over, but we have gone for James on this occasion.  James provides a running threat and we will be looking for him to show he can control the game as well and help us play in the right areas.

"Leigh had a good run out for the Blues at the weekend,  we know all about his pace and what he offers around the field as well as being solid under the high ball and giving us a long range kicking option.  Morgan Stoddart misses out, but he has done nothing wrong and we know he can be relied on if we need him from the bench.

"We also have a vast amount of experience in Stephen Jones and Dwayne Peel to call upon if necessary.  Both have proved in the past that they can come on and make an impact and neither will let us down."