The perfect start: 10 years on

Exactly 10 years ago to the day, the Lions recorded one of the most impressive Test wins ever seen on southern hemishere soil. [more] 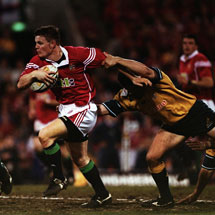 Exactly 10 years ago to the day, the Lions recorded one of the most impressive Test wins ever seen on southern hemishere soil.

In front of a sea of Red in Brisbane, Britain and Ireland’s elite produced a sublime display to thrash Australia 29-13 in the opening international of the 2001 Test series.

A brilliant performance during the first 50 minutes put the Lions out of sight and ensured a remarakble winning record in Queensland's premier city continued into the 21st century. Four brilliant tries destroyed Wallaby hopes and, although the result may not have led to a series victory, it at least showed the world what the Lions are all about.

A party atmosphere, some stunning rugby, and a number of world class individual performances made this a night to remember.

In 2001, the Lions arrived in Australia to face the then World Champions in their own backyard. The concept of the four Home Nations playing as one had received a substantial boost from the victorious 1997 tour and the 2001 squad were accompanied by a thunderous travelling support. On a warm, dry evening in Brisbane on June 30, Martin Johnson's tourists gave that band of supporters the perfect start to an incredible Test series. The Lions outscored their illustrious opponents by four tries to two to run out comprehensive winners in what could almost have been described as a 'home' fixture thanks to the sea of red that filled the Gabba.

Lions coach Graham Henry had seen his squad decimated by injury, with the likes of Lawrence Dallaglio, Dan Luger, Mike Catt, Simon Taylor and Phil Greening ruled out of the entire tour and players of the calibre of Neil Back unavailable for selection for the First Test.

Matt Perry was a surprise inclusion at full back ahead of Iain Balshaw who had been in scintillating form prior to the tour, while Jason Robinson defied his limited experience following his move from Super League to claim one of the wing berths. Robinson and Perry were joined in the back three by Welshman Dafydd James, another player who was given little chance of making the Test side before the squad left British and Irish shores.

Henry opted for an all Irish midfield partnership, with Rob Henderson's form ensuring he was given the nod alongside young sensation Brian O'Driscoll, who had started the tour in the No 15 shirt.

Jonny Wilkinson and Rob Howley began the match at halfback, with Howley finally winning a Lions Test cap after a shoulder injury wrecked what had been a sensational 1997 tour for the Welsh scrum-half.

The pack featured five Englishman, an Irishman, a Welshman and a Scot, with second row Martin Johnson skippering the Test side for the second successive tour. Johnson was joined at lock by fellow England international Danny Grewcock of Saracens.

Martin Corry received a late call up from England's trip to Canada to start at blindside flanker, with Richard Hill and Scott Quinnell completing the back row and Tom Smith, Phil Vickery and the inspirational Keith Wood starting in the front row.

The Lions got off to the perfect start thanks to a stunning individual try from Test debutant Jason Robinson. The former rugby league man marked his first appearance in a Lions shirt by scoring five tries against a Queensland President's XV earlier in the month and he had a similar impact against the Wallabies as he rounded Chris Latham with less than three minutes on the clock.

Having won lineout possession through Danny Grewcock just inside the Australian 10-metre line, the Lions showed their attacking intentions as they moved the ball straight off the top and into the 13 channel through Brian O'Driscoll. A superb pick up from scrum-half Rob Howley kept the move alive, with Scott Quinnell then moving the ball out to Jonny Wilkinson after the Lions secured quick ball from the resulting ruck. The England No10 fired a short pass to Matt Perry, who in turn showed impressive handling abilities to transfer possession to Jason Robinson in a single movement.

What happened next will go down in Lions folklore as the Sale winger made Wallaby full back Latham look more like an inexperienced schoolboy than a hardened international. When Robinson took Perry's pass just outside the opposition 22, he was faced with three covering defenders, making an inside run close to impossible. However, with no more than four metres of space outside him, it appeared as though the former Wigan player would have to cut his loses, step inside and simply concentrate on retaining possession. Robinson had other ideas, though, as he demonstrated an extraordinary turn of pace, faking to step in off his left foot before taking an outside line and leaving Latham in his wake.

Wilkinson was off-target with the difficult conversion attempt from wide on the left, before missing a long-range penalty with seven minutes on the clock but the Lions had their made their early intentions clear.

Wallaby wing Andrew Walker cut the deficit to just two points after 18 minutes but the rugby league convert failed to give Australia the lead as he missed for the first time just five minutes later.

A third successive miss from Wilkinson was quickly forgotten as Welshman Dafydd James rounded off a fine Lions move to push the tourists seven points clear two minutes past the half-hour mark. James dispelled any queries regarding his selection by taking a scoring pass from Robinson and supplying an accomplished finish after O'Driscoll had caused havoc in the Wallaby defence.

Wilkinson got off the mark with a testing conversion from the right-hand side of the field to give the Lions a 12-3 advantage which they would take into half-time thanks to Walker's second penalty miss of the match a minute before the interval.

If the Lions had begun the first half in spectacular fashion, the way they started the second period will have been just as well received by coach Graham Henry and the thousands of travelling supporters. With just a minute of the second 40 played, O'Driscoll cut the World Champions' backline to shreds on his way to a stunning solo try.

The 21-year-old Irishman emulated the achievements of Robinson and James in scoring on his Lions Test debut, with O'Driscoll's effort arguably even more impressive than the two that preceded it. O'Driscoll took a flat pass from Wilkinson at not much more than jogging pace five metres inside his own half before accelerating through the smallest of midfield gaps. The future Lions skipper left both Australian centres and openside flanker George Smith clutching at thin air before producing a remarkable side step to floor the onrushing Matt Burke. Thankfully, O'Driscoll still had the pace to outsprint Joe Roff across the remaining 25 metres as he raced away for one of the most memorable tries in Lions Test history.

Things got even better for Martin Johnson's men just six minutes later as Scott Quinnell barged his way over for a fourth try in the opening 50 minutes. The score was just reward for a hardworking and combative performance from the Welsh No8 who had suffered the disappointment of leaving the 1997 tour due to a double hernia operation. More importantly, it effectively put the game beyond the Australians who found themselves 24 points down with less than half an hour remaining.

Although Wilkinson's conversion was followed by two Wallaby scores during the latter part of the match, Rod MacQueen and his side had no way of overturning a substantial deficit against a Lions squad that continually troubled what had previously been described as the world's best defence.

"We have heard talk about the Lions but they really haven't produced it in the big games. Maybe they are capable of doing so but I am not so sure.

"It will be tough up front but the Aussies should have too much power behind. As a unit, I don't think they (the Lions) have the same power as the Australians."

"They're as strong as any team in the world, there's no doubt about that. They're going to be the biggest challenge Australia has faced in many years.

"You'd have to say England on their own are up there with the best teams in the world but this team's just going be stronger with the influence of a few other players and obviously Graham Henry."

"We are out here to win a Test series. I believe we have the players at our disposal to do so even though we have had a few injury hiccups. It would have been better to be able to select from a full squad but then again, maybe not.

"Certain players have put their hands up asking for selection by displaying their skills on the field and, in some ways, our job in finalising the team was that little bit easier because other people were already out of the equation."

"The most pleasing aspect of the Lions win was that they didn't rely on muscle to get them through the Australian defence. My view that the Lions would be too conservative was blown away in the first few minutes when Jason Robinson left Chris Latham grabbing thin air.

"The game could hardly have started better. With two minutes and 45 seconds on the clock we were five points up. It was a dream start, giving us the belief we could penetrate what was then the world's best defence."

"The best moment of the tour was the feeling after we had won the first Test. Hearing that final whistle and knowing that we had just beaten the world champions was just sensational."

"I was on the touchline right next to Jason Robinson when he ran round Chris Latham and it was quite unbelievable. The guy only had three yards to work in but just ran round Latham as if the Aussie was made of stone."

The Lions at the Gabba:

This was the first time that the Gabba, an Australian Rules ground, had hosted a rugby match.

The Lions in Brisbane:

However, the Lions have played in Brisbane on 25 occasions, losing just once.