Wales captain Matthew Rees has been ruled out of Saturday's clash with England at Twickeham. [more] 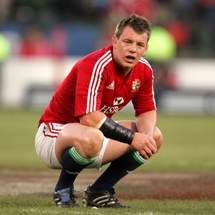 Wales captain Matthew Rees has been ruled out of Saturday’s clash with England at Twickeham.

The 2009 Lion is currently struggling with a neck injury that may now require surgery.

Rees is seeing a specialist today, with Wales boss Warren Gatland admitting that there is a possibility that the Scarlets hooker may yet be forced to go under the knife sooner or later

"Matthew's had a bit of a neck problem for a few weeks," said Gatland.

"He's getting injections today and we're hopeful he will be alright in the next week or two.

"An operation is a definite possibility but we are hoping it definitely won't be before the World Cup. If he doesn't improve, he may need something after the World Cup."

Rees has led Wales since last year’s autumn internationals after establishing himself as a world-class performer on the 2009 Lions tour of South Africa.

The 30-year-old had a major impact on the Lions’ setpiece after coming on as a replacement in the first Test in Durban and has been a nailed-on starter for Wales ever since.

Rees received plenty of praise for the manner in which he has led Wales from the front despite a disappointing autumn campaign and a fourth-place finish in the RBS 6 Nations.

His absence from this weekend’s trip to London and possibly the return clash in Cardiff a week later and the final warm up match with Argentina on August 20 would be a big blow for Gatland as he attempts to build a winning culture prior to the World Cup opener against the Springboks on September 11.

Even more worrying is the thought of heading to New Zealand without his star skipper, however – an outcome Gatland admits remains a possibility.

"If he doesn't improve and it gets worse there is always that risk (he may miss World Cup) but we're hoping there will be a significant improvement in the pain he is experiencing," added Gatland.

"There is a bit of nerve pressure and we're hopeful the injections will help. It is mainly affecting him when he is trying to sleep.

"Ideally, you would like him to play in the warm-ups because you don't want him to go in cold.

"He's getting frustrated because he hasn't been able to do much in the last couple of weeks and he can see the other players going away from a bit."

Gatland has announced that Sam Warburton will captain Wales in Rees’ absence, with the Cardiff Blues openside having led Wales against the Barbarians at the beginning of June.