Danny Cipriani says representing the Lions in Australia remains a massive ambition of his. [more] 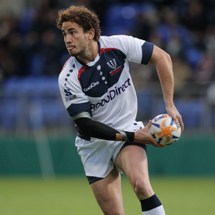 Danny Cipriani says representing the Lions in Australia remains a massive ambition of his.

The mercurial fly-half is currently based Down Under with Melbourne Rebels and would love the opportunity to star for Britain and Ireland’s elite in his new home in two years time.

Cipriani just missed out on selection for the 2009 tour of South Africa while at London Wasps but he believes his experiences with the Melbourne Rebels will make him a better player by the time the Lions next head to the southern hemisphere.

And although his England career has gone cold since his rapid rise on to the international scene three seasons ago, Cipriani is hopeful he’ll be playing for all four Home Nations in 2013.

“The Lions is definitely what I want to do,” said Cipriani, who currently has seven England caps to his name.

“The 2103 Lions is definitely at the forefront of my mind. I’m looking forward to hopefully playing well and then seeing what happens.”

And while his England career shows no signs of being reignited in the foreseeable future, Cipriani’s Lions dream may strangely be a more realistic target.

The world’s most famous touring team has a long-standing habit of picking uncapped or out of favour individuals and, even though that trend has become less prevalent in recent years, it wouldn’t be a major shock to see Cipriani selected for the series against the Wallabies.

If the young playmaker can rediscover his early career form over the next two seasons, Cipriani’s unique circumstances could stand him in great stead to follow 2009 trio Stephen Jones, Ronan O’Gara and James Hook in wearing the Lions No10 jersey.

His understanding of the Australian game and his familiarity with playing conditions and the opposition could well be a big advantage come 2013. Throw in the fact that taking on the best that Super Rugby has to offer is making Cipriani a better all-round player and the prospect of a Lions call up suddenly doesn’t seem so far fetched.

“It’s something that I’ve definitely enjoyed and prospered from. I’ve really leant a lot from the people around me. Next year it’ll be the same thing.

“Super Rugby is the best league in the world when it comes down to it because you’re playing against the best players.

“There’s the speed and the pace of the game, plus they make every game an occasion as well. There’s fireworks etc and it’s like a Test match every week.”

Danny Cipriani is aiming to be a Lion in 2013

Unfortunately for Cipriani, the pitch wasn’t the only place to witness fireworks last season.

Having left English shores with a reputation as something of a party boy, Cipriani’s career in Melbourne appeared to be in trouble following an unsavoury incident in a night club and a later breach of team protocol.

The first of those incidents led to plenty of bad publicity and a suspension while the second saw him left out of his team’s tour of South Africa and linked to a quick return to the Aviva Premiership.

But both the player and the franchise appear to have put those troubles behind them and things seem a lot rosier looking ahead to 2012. Cipriani played a leading role on the recent development tour of the UK and has won back the respect of senior players and management, with veteran centre Stirling Mortlock claiming to be ‘really proud of the way Danny wants to drive the team to be better’.

“I feel like I’ve grown into my own skin,” was Cipriani’s own assessment of his improved standing with the Rebels.

“There were ways that I used to deal with my opinions and how I used to express them. I was probably a bit passionate and eager in trying to get that across. It’s about developing a relationship with the people around you and that’s something I’ve learnt a lot about.

“Moving forward as a team, we’re a brand new franchise and we’re learning all the time. I just needed to understand that we’re all doing that together as opposed to maybe talking out and trying to move things in different ways.”

Cipriani returned to Britain and Ireland on the Rebels' recent tour

The Rebels certainly look set to move forward next term after they announced two huge signings to spearhead their second season of Super Rugby.

Wallaby sensations Kurtley Beale and James O’Connor are heading to AMY Park as the Rebels look to build on the three wins they gained in their debut campaign.

The pair have both highlighted Cipriani as one of the reasons behind their switch from the Waratahs and the Force respectively, with the Englishman’s talents clearly having a visible impact right across the Australian game.

“We won three games and we hope to win more next time. It’s a big learning curve for everyone but we’ve signed two great players for next year. We’ve made two great signings in Kurtley Beale and James O’Connor so hopefully we’ll be a much better team.

“I get on very well with James and I was on the phone to him every week trying to get him to come down. I wanted him to come down to make sure we had a strong side as he’s one of the best players in the world.

“I know James through rugby circles and the ins and outs and it’s the same with Kurtley – he’s been the form full back or even the form player in the world for the last two or three years. To get those two down, to bounce ideas off each other and to watch them play is going to be great for us as a squad.”

Like both Beale and O’Connor, one element of Cipriani’s game that has always deserved special attention is his fleet of foot.

His speed across the park even on rain-drenched pitches back home was a talking point in opposition pep talks and that attribute has become an even bigger tool on the dry tracks in Australia, New Zealand and South Africa.

But while tries like his effort against the Sharks showed just how quick Cipriani really is, he’s determined to get even faster. An extended spell in the UK this month and next won’t just be used to catch up with some old friends but instead to work once again with renowned sprint coach Margo Wells.

“I’m not going back to Australia until October 20. I’m staying in England for a couple months and then going back via a few countries.

“I’m doing a six-week training course with Margo. Then I’m taking another three weeks off after that and then I’ll start training for pre-season.

“I’ve not seen Margo properly for six weeks in a row since I was 18. I’ve seen her here and there but that’s it. A six-week fitness course with her means I’ll be in relatively good nick for turning up to pre-season. There’s a lack of coaching of speed in rugby and she’s the best at it.

“What’s the one thing that everyone’s scared of? It’s speed. You can get in the way of a big guy and give it a shot but you can’t really cover speed. For me, it’s just about physically getting better and preparing myself for next season.”

To book your place on the 2013 Lions tour to Australia and for all your travel news, visit www.lionstour.com