Lion looking at three weeks out

Wales utility back James Hook look set to miss the remainder of the group stages of the World Cup with a shoulder injury. [more] 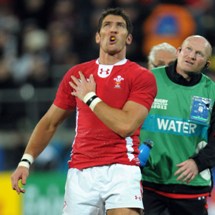 Wales utility back James Hook look set to miss the remainder of the group stages of the World Cup with a shoulder injury.

The 2009 Lion suffered the setback during the 17-10 win over Samoa in Hamilton on Sunday and could now be unavailable for the games against Namibia and Fiji on September 26 and October 2 respectively.

Wales expect Hook to be sidelined for two to three weeks, leaving him facing a race against time to be fit for a potential quarter final against Ireland on October 8.

There are also concerns surrounding inform blindside flanker Dan Lydiate who turned his ankle in the opening moments on Sunday.

Lydiate faces a scan today and more will be known then on how serious the damage is.

"I think it's a grade one or two injury that James has," said Wales and Lions assistant coach Shaun Edwards.

"Dan has to go for a scan on Monday. We're still in the dark about Dan, we'll know more after his scan.

"James’ is a little easier detect to what it is. He has done his AC joint."

Former skipper Ryan Jones could be available for the fixture against Namibia after his recovery from a calf injury appeared to be progressing quicker than expected.

Jones was at first thought to be targeting the Fiji game as a likely return date but could be ready for action a week earlier.