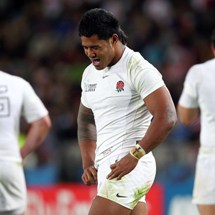 The 20-year-old Leicester Tigers player was formally warned by police and fined £3,000 by the Rugby Football Union after the incident in Auckland.

"A member of the England team jumped off a passenger ferry and swam a short distance to pier three at the terminal at 6.48pm last night," said an Auckland Police spokesperson earlier today.

"As he climbed ashore he was met by police officers before being taken to the Auckland Central police station and held for around an hour and a half.

"He was formally warned about the offence of disorderly behaviour before being released back to the team management. There is no suggestion he was pushed from the vessel."

Tuilagi, who has since issued a short apology for his actions in which he described the jump as ‘a silly thing to do’, was one of the few bright lights in what proved to be a disappointing tournament for the 2003 World Champions and 2007 beaten finalists.

England were knocked out at the quarter-final stage when they lost to France on Saturday afternoon having failed to shine in three of their four pool games against Argentina, Georgia and Scotland.

Tuilagi’s ferry jump is the latest in a line of indiscretions to have grabbed the headlines in New Zealand and the UK, with a night out in Queenstown bringing plenty of unwanted attention and a trio of players being warned about their conduct following an incident with a female hotel worker in Dunedin.

"This was an irresponsible thing to do. Manu has been disciplined internally and I have warned him about his future conduct," was team manager Johnson’s assessment, although the RFU wouldn’t comment on whether alcohol was involved in the incident.

The fine will be paid to the Rugby World Cup's Christchurch earthquake appeal.

Earlier this month, Tuilagi was fined £4,800 by the International Rugby Boardfor wearing an unapproved gumshield promoting the name of a sponsor.