Gethin Jenkins has stated his desire to complete a hat-trick of Lions tours in 2013. [more] 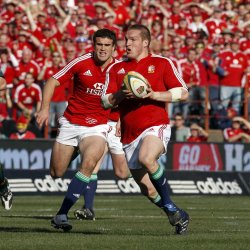 Gethin Jenkins has stated his desire to complete a hat-trick of Lions tours in 2013.

The Wales loosehead won Test caps in New Zealand in 2005 and South Africa in 2009 and is now targeting a place in the squad for the next tour to Australia.

Jenkins will be 32 by the time Britain and Ireland’s elite head Down Under but, with plenty of props not hitting their best form until their 30s, Jenkins believes he has the potential to play on to the 2015 World Cup in England.

"I don't want to talk it up too much, but my two main targets are to go on another Lions tour and to make another World Cup," said Jenkins.

"I will keep going as long as I can and until I feel I'm not doing a good enough job at that level.

“Props in general, they have long careers, and there are more and more examples of people going on for longer at the top.

"I'm hopefully young enough to keep going. Adam Jones is not far off the same age and he's definitely looking at another World Cup.

"The World Cup was a great experience which I will treasure but I'm already looking forward to doing it all over again in four year's time."

But Jenkins insists Wales must put their recent achievements behind them and focus on the future, starting with the repeat of the Bronze Medal match with Australia in Cardiff on December 3.

"We had a good eight weeks at the World Cup and it was a great journey but we have to move on," added Jenkins.

"If we are going to be a force at the next World Cup, and each year in the Six Nations, we have to keep raising the standards.

"We know how good Australia are, they turned up in that third-place play-off and gave a very good performance.

"It's up to all the Welsh players now to perform for their regions and win selection for that game in which we'll try to get some revenge. The challenge now is maintain the standards we showed at the World Cup when we are back with our regions."