Lions skipper Paul O'Connell has given Irish Rugby a major boost by resigning with Munster. [more] 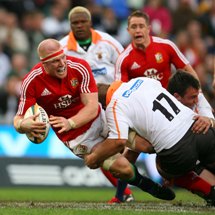 Lions skipper Paul O’Connell has given Irish Rugby a major boost by resigning with Munster.

The man who led the 2009 Lions in South Africa has agreed a new deal to remain with the reigning RaboDirect PRO12 Champions until the summer of 2014.

O’Connell has played all his professional rugby with Munster but his status in the game meant a big-money move to France was always a possibility for the 32-year-old.

But the legendary lock, who has just been named Ireland captain for the RBS 6 Nations in Brian O’Driscoll’s absence, now seems set to see out his career at Thomond Park.

"I have been lucky over the last 10 years to play with a team like Munster which has such phenomenal support and I have enjoyed a lot of success during that time," said O'Connell.

"So much has changed since my first games for Munster and Ireland, with Heineken Cup and Grand Slam wins, brand new stadiums and having the opportunity to play with so many good players, that it was always a very easy decision to remain in my home province.

"I am feeling really good both mentally and physically, which in part goes down to how well we are looked after here in Ireland, so I am looking forward to the remainder of this season and beyond and doing all I can to help make Munster and Ireland as successful as possible."

As well as success in the Celtic League, O’Connell has won a brace of Heineken Cups with Munster, captaining them in their second European triumph in 2008.

He has picked up a Grand Slam and five Triple Crowns with Ireland and currently holds 82 caps for his country.

The former youth swimming star has played in the last six Tests for the Lions and is still a favourite to make a third tour when Britain and Ireland’s elite head to Australia in 2013.

He remains an icon of Irish rugby and his decision to stay put rather than look for pastures new is great news for Declan Kidney and co. Unlike their Welsh counterparts, who have already lost Lions trio Lee Byrne, James Hook and Mike Phillips to French club rugby and who could see the likes of Adam Jones and Gethin Jenkins join Luke Charteris in leaving at the end of the season, the IRFU seem to be able to hold on to their most high-profile names despite interest from abroad.

“The retention and development of Irish players is one of the top priorities for Irish Rugby to ensure continually competitive teams at provincial and international level," said IRFU chief executive Philip Browne.

"Paul O’Connell is a prime example of this and I am delighted that he has further committed himself to Munster Rugby and the IRFU.

"He has done so much to contribute to the success of the Munster and Ireland teams during his career and is a shining example for younger players."