The magic of Melbourne

The city of Melbourne is all set to be one of the success stories of the 2013 Lions tour. [more] 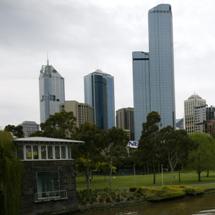 The city of Melbourne is all set to be one of the success stories of the 2013 Lions tour.

For so long the city has played second fiddle to the likes of Sydney and Brisbane, with even Canberra and Perth out-shinning the Victorian capital on the big stage.

While Sydney has hosted 40 matches and Brisbane 25 across 11 tours, Melbourne has welcomed the tourists on just seven occasions since 1888.

Of those seven matches, five have been against Victoria, one against Australia’s second string and only once have the Lions faced the Wallabies in the country’s second most populated city.

The city didn’t feature at all on the fixture list for four of the Lions’ visits to Australia and has never hosted more than one game on any Lions tour but all that is set to change when Britain and Ireland’s elite head Down Under next year.

The pride of 2013 will play two games in Melbourne towards the end of their trip, with the crucial second Test scheduled for the city on June 29, four days after the final midweek match against the Rebels at the AAMI Stadium.

The 2013 Lions will play twice in Melbourne

Rugby Union has always been a poor relation of Australian Rules Football, cricket and Rugby League in the Victorian sporting hierachy but the rise of the Rebels has had a significant impact on boosting the profile of our game ahead of the latest Lions’ adventure.

Australia’ newest Super 15 franchise may have finished bottom of their conference in their debut season last term but the impact they are having off the field bodes well for what should be a truly memorable stay in Melbourne for the Lions.

Crowds of 25,000 for some Super 15 games in the city shows just how passionate the Melbourne public can be about a side that carries their city’s name and that commitment to the cause will only be heightened when the world’s most famous touring team come to town.

We caught up with a trio of Rebels to get the inside view on what Melbourne can offer the Lions and what the Lions can offer Melbourne. Here’s what Nathan Grey, Stirling Mortlock and Gareth Delve had to say about the way the people of Melbourne have embraced the game since the birth of their pro team…

“It will be so good for the Rebels to play the Lions – it’ll be absolutely brilliant. It’ll be a really special occasion.

“The Lions concept is awesome. The experience, the vibe and the love of rugby that the Lions bring to any country they go to is magical.

“And having Super 15 rugby here in Melbourne has been awesome so far as well. The rugby public in Melbourne and Victoria are hardcore because they’ve had to be.

“Those guys have been really supportive from the off and we really wanted to serve them. But we’ve also turned so many people into rugby lovers as well. There have been a lot of guys who are AFL fans who didn’t really understand the game but just went down to watch the Rebels on Friday nights and got really into it. By no means are we trying to compete with the AFL, though. We want all the Victorians to have an AFL jersey on and then underneath have a Rebels jersey on.

“The people of Melbourne have been really welcoming to us all. They don’t know their rugby as much as some other parts of the country but they’re getting better. What they do really appreciate is effort and the fact that you’re representing Melbourne.”

“If the Rebels can have more success as a team on the pitch, the number of fans in Melbourne will grow, especially now we’ve got a fixture against the Lions as well.

“It’s been really heartening to see that, no matter what, the fans have stuck with us and given us a good foothold in what is very much an AFL city.

“We’ve been so lucky. We’ve gone out and really tried to embrace the community by getting out and taking coaching clinics and being a visible presence. But we couldn’t have asked for more. The Rebel Army have been incredible.

The Rebels have proved hugely popular with the people of Melbourne

“The guys that have set that up have been great in getting Melbourne out there. I think our supporters featured as fans of the week for the majority of last season. At times when we were really struggling and under the pump, they lifted us and stuck with us through thick and thin. We’ve really enjoyed it and hopefully we’ll build on that this year.

“The Lions tour will be a great trip and a great occasion. No one travels as well as the Brits, as we saw with the Ashes, and the Australians love welcoming people over so, whatever happens, it will be a great tour.

“Australia’s certainly one of the best countries to tour around and obviously one of the biggest. It’s going to be one hell of a tour and a series and I think everyone in Australia’s looking forward to it.”

“I really hope that, by the time of the Lions tour, we’ve really built on the foundations we’ve laid in the first year or so of having a Super Rugby side in Melbourne.

“Having the opportunity to host a Lions Test match in Melbourne and getting to a play a touring match here is be a big coup for our city.

Stirling Mortlock is predicting big things for rugby in Melbourne

“I think so far the Rebels have been a really positive story. Results wise, we’d like to have done a little better but the initiatives we’ve embarked on have all been really positive, in particular our connection with the community which has been fantastic.

“Our season ticket holders and our support base has been amazing. The guys are doing a really fantastic job of trying to get out into the community to help grow the game and that’s really pleasing.

“Melbourne is such a sports mad city that the Rebels have taken the view that ‘if we build it, they will come’. And that’s exactly what’s happened.”