Sebastien Chabal could face the Lions in 2013. [more] 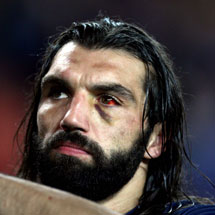 Sebastien Chabal could face the Lions in 2013.

The iconic Frenchman is set to move to an Australian franchise in the coming weeks.

Chabal had his contract terminated by Racing Metro in late January after falling out with head coach Pierre Berbizier.

The former Sale star had been linked with a return to England but has instead decided to head Down Under a year before the Lions do the same.

Chabal has yet to announce which Super 15 side will he join, simply telling French TV channel RMC, ‘I’m going to play in Australia soon’.

All five Australian Super 15 teams will face the Lions in 2013, with the Western Force kicking things off on June 5, four days after Britain and Ireland’s elite take on the Barbarians in Hong Kong.

Reigning Super 15 champions the Reds are next in line on June 8, with the Waratahs hosting the Lions a week later and the Brumbies and Rebels getting their chance of a famous scalp on June 18 and 25 respectively.

Chabal’s most likely destination seems to be the Rebels or Brumbies as the Reds, Waratahs and Force all boast Wallaby No8s in their current squads.

The controversial 34-year-old is unlikely to unseat Radike Samo, Wycliff Palu or Ben McCalman from a starting spot, leaving Melbourne or Canberra as more sensible options for 62 times capped back rower, although his ability to play second row as well as flanker may also attract the other franchises.

Chabal will be just the second Frenchman plying his trade in the Super 15 as he follows Frederic Michalak to the southern hemisphere’s premier club competition. Michalak is currently with the Natal-based Sharks in South Africa, although the mercurial halfback is heading to Toulon at the end of the 2012 season.