Rory Lamont has had surgery to repair a broken leg. [more] 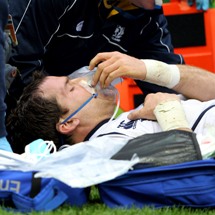 Rory Lamont has had surgery to repair a broken leg.

Lamont twisted awkwardly on the half-hour mark at Murrayfield and played no further part in proceedings as the Scots lost their fifth straight Test match and their third in this year’s 6 Nations.

The 29-year-old went under the knife early today, with an update on his progress expected tomorrow.

"Rory is under the care of the orthopaedic surgeons at Edinburgh Royal Infirmary,” said Scotland and Lions doctor James Robson.

“He was undergoing surgery this lunchtime to stabilise a fracture to his fibula.

“We will issue a further bulletin tomorrow following this surgery."

Lamont will miss the remainder of the 6 Nations and it would be a major surprise if he returned to action before the end of the season.

The summer Test against Australia in Newcastle, New South Wales may also come too soon for Lamont, whose career has been blighted by injuries.

The Glasgow Warriors star, who recently returned home after a spell with French Top 14 team Toulon, had eight operations in six years up until 2009.

Injury then prevented him from making a serious case for inclusion on the latest Lions tour to South Africa after he missed the entire 6 Nations campaign with an ankle problem.