Two of the stars of recent Lions tours tasted glory in Japan this weekend. [more] 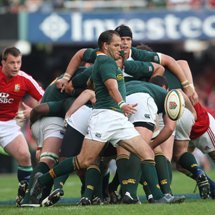 Two of the stars of recent Lions tours tasted glory in Japan this weekend.

Du Preez was one of the central figures on the last Lions tour to South Africa two summers’ ago, while Smith was part of the Wallaby side that beat Britain and Ireland’s elite in 2001.

Smith, who featured in each of the Wallabies’ encounters with the Lions 11 years ago, scored a stunning hat-trick in Japan’s showpiece event, unsurprisingly scooping the man of the match award in the process.

The veteran Australian flanker was also named the Top League’s most valuable player in his first year with the club after joining from Toulon last summer.

Du Preez was almost as influential on the day, scoring a try and creating one for Smith with a clever inside ball.

The South African No9 was one of his country’s most impressive performers in the 2-1 series success against the Lions, starting all three Tests and winning the penalty that handed the Boks victory in the second rubber at Loftus Versfeld.

Another of the South African stars of that series was on the losing side in the final game of the Japanese calendar, however, with Jaques Fourie the brightest spark for the Wild Knights.

The former Stormers and Golden Lions centre crossed for a brace of tries in an outstanding individual display but it wasn’t enough to stop Eddie Jones-coached Suntory from claiming Japan’s ultimate prize.