Brian O'Driscoll could emerge from his post-World Cup shoulder operation sooner rather than later. [more] 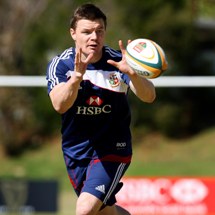 Brian O’Driscoll could emerge from his post-World Cup shoulder operation sooner rather than later.

The British & Irish Lions legend is hoping to make a bid to play for Leinster in their Heineken Cup quarter-final against Cardiff Blues on 7 April at the Aviva Stadium. That will surely provide the ultimate test for his shoulder when his 2009 Lions midfield partner Jamie Roberts comes charging at him, but his return to full fitness will be good news for everyone – club, country and the Lions.

Even though O’Driscoll is now 33, his form has been good enough for both Leinster and Ireland to suggest he will be among the leading candidates for the 2013 Lions tour to Australia. If he makes the grade it will be his fourth tour.

Only fellow Irishmen Willie-John McBride and Mike Gibson have been on more tours, five apiece, and O’Driscoll has made it clear he would like to play-on until 2013. He is contracted to Ireland until 2013, and the Lions tour of Australia could end up being his swansong.

The 100+ cap centre made his Lions Test debut on the 2001 tour to Australia and, with Irish team mates David Wallace and Ronan O’Gara, he would be one of the few players to survive from the last series against the Wallabies.

“Brian is progressing well. I think he’s going to see the surgeon in the next couple of weeks to see where he’s at, but as things are going he’s progressing quite well,” Leinster forwards coach Jonno Gibbs told the Irish Independent.

Earlier in the season O’Driscoll, who captained the Lions on their ill-fated tour to New Zealand in 2005, told Rugby World his inspiration was “about trying to be the best I can be”. That means returning from injury and picking up where he left off at the World Cup, when he steered Ireland to a Pool victory over Australia before losing to Wales in the quarter-finals.

“It’s about trying to show those who doubt me, the people who might think I'm over the hill, that I still have it. You want to throw in some big performances and win things and silence those critics, that's important,” he said.

“But you also want to try to leave some sort of legacy behind as to what kind of player you were. I don't want to be somebody who just petered off towards the end of his career, I want to go out on a high."