Springbok prop Tendai Mtawarira has been in hospital with a heart condition. [more] 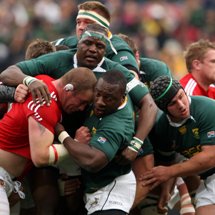 Springbok prop Tendai Mtawarira has been in hospital with a heart condition.

The Sharks star, nicknamed ‘Beast’, travelled to Cape Town for testing after complaining of heart palpitations.

Mtawarira, who grabbed plenty of headlines as the Springboks beat the Lions in 2009, has been suffering from the condition for some time.

The 26-year-old loosehead is currently sidelined for approximately four months after recently breaking his ankle in training and his Super 15 franchise have decided to use the time off to investigate his heart problems further.

"There is a family history and the condition is hereditary. But it is not so serious," said Sharks team doctor Ewoudt Van der Linde before Mtawarira returned home on Tuesday.

"It's nothing new and has happened many times in matches before. Beast is used to it already. This is not the first and also not the last time it will happen.

"Beast has been struggling with the condition for quite some time and, because he is recovering from his ankle injury, we thought it would be the opportune time to send him to Cape Town for treatment.

"They have a new procedure where the heart is treated with lasers. Hopefully it will solve his problem."

Mtawarira won plaudits for his performances against the Lions two summers ago, with the Zimbabwe-born front rower getting the better of England veteran Phil Vickery in the first international.

He went on to play in both the second and third Tests and currently has 32 caps to his name.

"This was just something small that was bugging me, but it is all resolved and nothing serious to worry about at all," said Mtawarira.

"I am home and doing my rehab at The Sharks Medical Centre for my ankle, which is going well and is all on track."

The South African-born tighthead, who is a former Wales squad member, previously spent seven months on the sidelines with mystery chest problem between October 2007 and May 2008.