There will be more than 35,000 British & Irish Lions fans in Australia next summer but there will be only one person who can claim to be the first to book his seat on the plane Down Under - John Nisbet from Dundee. [more] 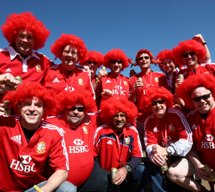 There will be more than 35,000 British & Irish Lions fans in Australia next summer but there will be only one person who can claim to be the first to book his seat on the plane Down Under – John Nisbet from Dundee.

It took less than two hours from lionstour.com going live and his Priority Access Pass pack landing in the post for John and his wife Lynn to complete their booking for all three Tests and the Melbourne provincial game in June 2013 and John is already setting his sights on another great trip to Oz.

“I had been waiting for the Priority Access Pass to come through the post in the morning and then just went online to get everything done,” said John.

“There were 10 easy booking steps and the whole thing took me less than 10 minutes. I was there for the 2001 Lions Tour and just fell in love with the country. I made a promise to myself that when the Lions went back 12 years later I would be there.

“How does it feel to be the first Lions fan to officially book? It’s a great feeling – I can’t quite believe it.

“What makes the Lions so special is the camaraderie between the fans. People meet, get together and stay with each other for six weeks. It’s like a Six Nations weekend but magnified 10 times.

“It’s like lighting the blue touch paper, standing back and experiencing the atmosphere.”

Official ticket, travel and accommodation packages for next summer’s tour are now available at lionstour.com and fans are already booking their chosen tour package for the 10-game tour that begins against the Barbarians in Hong Kong.

Lions fans have already swamped Lions Rugby Travel with bookings and requests for tours and interest will continue to grow now official travel packages are on general sale.

As the official tour provider, Lions Rugby Travel is the only place where fans can book their Lions tour experience now.

The Lions enjoyed an incredible following in Australia back in 2001

There is already significant talk in the regions, shires and borders about who will be the man to lead the Lions Down Under and the early form guides to the men hoping to make up the 125th anniversary tour squad have already been penned as the 2012 RBS 6 Nations Championship reaches its dramatic conclusion.

The Lions last won in Australia in 1989 when they came from a Test match down to beat the Wallabies 2-1.

Man of the series back then was Mike Teague, the tenacious back-rower from Gloucester, who was at the forefront of the forward effort that took the Lions to victory.

“In terms of what you want to achieve as a player, I think the Lions are everything. England was one thing but the Lions is the absolute pinnacle of any player’s career. The honour can’t be measured – it’s just fantastic,” said Teague.

“It’s that little short phrase that people use – ‘you’re a Lion’ – that means so much. And from the point of view of going toAustralia, that was just the icing on the cake.

“It’s just afantastic country to go to and their sporting heritage is amazing. To go over there and win was very, very special.”

And when the Lions touchdown in Australia next summer, John Nisbet will be there with them – as part of the great mobilisation of fans ready to throw their support behind the legendary red shirt.

“A Lions tour is simply the chance to experience the rugby and holiday of a lifetime. It’s something unique to rugby and it’s why I knew I wanted to go back to Australia,” added John.

“I would say to anyone who has been thinking about going: ‘just book it, you won’t regret it’. The fact you can do it officially with the Lions is also really important. I would think it is pointless looking elsewhere.

“The atmosphere is great, Australia is a wonderful country, Melbourne is a fabulous place and the welcome is laidback and fun – I know I have booked early but I can’t wait.”

Fans can book their places to Australia now by visiting lionstour.com, the official home of Lions Rugby Travel.