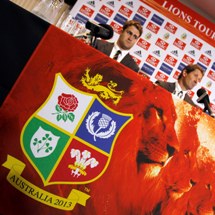 Just like fellow regulars Kurtley Beale and James O'Connor, the man destined to lead Australia against the Lions in 12 months’ time won’t be available to take on Scotland and Wales next month.

Horwill damaged his right hamstring in the latest round of Super Rugby and a scan has since shown a torn muscle.

The star second row suffered the setback in the Reds’ 13-12 win over the Brumbies in Canberra on Saturday and will be sidelined for the June 5 Test with the Scots in Newcastle and the June 9, 16 and 23 encounters with the Welsh in Brisbane, Melbourne and Sydney.

"The next few weeks and Tests are out of the question for me, but the better news is the injury is not as bad as I initially thought," said Horwill as he met up with the rest of the Wallaby training squad earlier today.

"I got caught and instantly felt something pop in the back of my leg. The concern for me was it being on the same side where I had my knee operated on (in 2010) but the thinking of the doctors is that the hamstring damage is more in the middle of the leg.

"It's really disappointing, but there's a lot of rugby still to play this year."

The initial forecast suggests a likely lay off of around a month, meaning he could return for the Reds on June 29 and would at least be fit to feature fully in the extended Tri Nations – now known as the Rugby Championship – against New Zealand, South Africa and Argentina.

Openside flanker David Pocock and scrum-half Will Genia are being tipped to captain their country in Horwill’s absence and the 26-year-old believes either will be more than capable of stepping up to the role.

Genia previously skippered Australia against the United States at last year's World Cup, while Pocock was named captain when the Wallabies beat the Barbarians at Twickenham in November.

"Both guys have the experience as part of the Wallabies leadership group since the start of the World Cup," added Horwill.

"I've every confidence in either doing a good job of the captaincy. Both will be willing candidates."