Wales must be ‘streetwise’

Caretaker Wales coach Rob Howley will be asking his players to be "more streetwise" at the breakdown when they face the Brumbies in Canberra on Tuesday night (kick-off 7.30pm). [more] 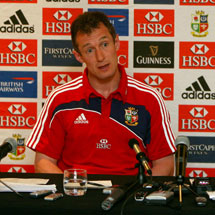 Caretaker Wales coach Rob Howley will be asking his players to be "more streetwise" at the breakdown when they face the Brumbies in Canberra on Tuesday night (kick-off 7.30pm).

Having seen his Test team undone at the tackle area by the Wallabies back row in Brisbane last weekend, Howley wants to use the midweek game in the Australian capital as the starting point for a fight back on the floor.

“We have to be more streetwise and adaptable. You have to play to the referee’s strengths,” said Howley.

The Brumbies have been the surprise package in the Super 15 this season and are the leading Australian side. But coach Jake White is missing eight players on international duty and has selected a pretty inexperienced side.

Wales have lost twice to the Brumbies in the past and Howley knows all about the potential firepower contained within the home team ranks after playing in a 69-30 defeat in 1996.

“They had a pretty potent back line in 1996 and beat us by 60 odd points. This season they have been a surprise package in the Super 15,” said Howley, who score two tries in the game 16 years ago.

“They kick a lot and go to the air a lot, so our back three will have to work hard. But this is an opportunity for these players to play in the national jersey and push their claims for Test places.

“On a lot of tours the midweek side becomes very important in terms of attitude and this group were out training a 9.00am the morning after the first Test. Some of the boys are backing up, but we are confident in our fitness and where we are with this team because they had a game against the Baa-Baas.

“Competition for places has been a big ingredient in our performances of late and we have a good blend of experience with youth in the side.”

Cardiff Blues teenage wing Harry Robinson gets another chance to shine after scoring a try on his Test debut against the Barbarians, while at the other end of the experience scale the Ospreys lock Alun Wyn Jones will captain the side.

“In the past we have had depth in the Welsh squad, but not strength in depth. Right across the board we have talent and that bodes well for selection,” said Jones.

“It shows the production line from the regional rugby academies is working pretty well. This game on Tuesday is a shop window for all the players, a game in which to put up your hand to try to win another cap.”

The Melbourne Rebels skipper Gareth Delve will be among the replacements having replaced the injured Toby Faletau in the tour party. Howley revealed Faletau broke his hand five minutes before he was replaced in the first Test.

“It’s the nature of the sport. He did it five minutes before we took him off, but we are lucky to have Gareth on stand by out here in Australia,” said Howley.

“We spoke to him four weeks ago to see if he would be available and it means we can replace a No 8 with a No 8. He has been playing well for the Rebels and this is another opportunity for him.”

While Faletau is out of the tour and heading home, Howley is confident that his first Test injury victims, wing George North (dead leg) and centre Scott Williams (facial injury), will be fit for selection for this weekend’s second Test in Melbourne.