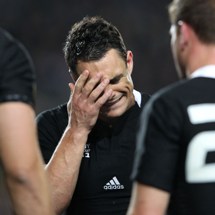 The star fly-half slotted a last minute drop goal to snatch a 22-19 victory and a 2-0 series win over Ireland last weekend,
But Carter will miss the third and final Test, due to a hamstring strain, with Aaron Cruden deputising like he did at the World Cup.

And O’Driscoll, a triple tour Lion, reckons the All Blacks’ World Cup success is proof they can cope without Carter.

"They managed okay in the World Cup, didn't they?" said O'Driscoll.

"Dan Carter is a world-class player but Aaron Cruden is handy enough and he has shown it. The bits I've seen of the Super Rugby this season he has been pretty impressive.

"They have to look at life without Dan Carter and it gives Aaron a great opportunity. It is not all about the guy pulling strings at 10, you need smart players around you and I think New Zealand have that."

O’Driscoll has been ever present for Ireland in New Zealand but will line up alongside Paddy Wallace in the third different midfield partnership of the series.

The Leinster legend linked up with Lions Gordon D’Arcy and Keith Earls in the first and second Tests but has backed Wallace to make the most of the opportunity.

"Any time you have someone like Paddy coming in, he will always bring something," added O'Driscoll

"Not just his playing ability but the character he is around the squad. I've known Paddy a long time, played underage level with him, under-19s, through college and through senior rugby with Ireland.

"Knowing the type of professional he is, the shape that he has kept himself in, Paddy will do an excellent job. I'm looking forward to reigniting that midfield partnership with him."