Geech backs Lions’ chances Down Under 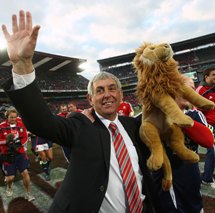 Sir Ian McGeechan believes Britain and Ireland’s elite have a great chance of success next summer.

The Lions head to Hong Kong and then Australia in June 2013 as they look to avenge their 2001 series defeat to the Wallabies.

The tourists haven’t tasted series glory since McGeechan led them to a stunning triumph in South Africa 15 years ago but the man dubbed the Lion King for his involvement across seven tours is confident they can buck that recent trend Down Under.

"I believe the Lions have a really good chance in Australia," McGeechan, who was speaking as an ambassador of Lions sponsor FirstCape wines told Sky Sports.

"There is a group of really talented younger players coming through and with another year they will keep developing and improving.

"It is very exciting the amount of quality in different positions. I think if you look at all of the back rows across the home unions they could all stake a claim to start for the Lions."

With Wales running the Wallabies so close this month, England earning a creditable draw in the last Test with the Springboks and Scotland finishing their own tour unbeaten, plus the depth of talent in an Ireland side that is heavily filled with the stars of Leinster’s three Heineken Cup crowns in four seasons, there are plenty of reasons to be cheerful ahead of next year’s trip.

McGeechan is even convinced that some world-class players will have to be left behind next summer as the Lions selectors look to pick a squad they feel is capable of challenging the current Tri Nations Champions in their own backyard.

The former Scotland centre, who was a victorious Lion as a player in 1974 and as a coach in 1989 and 1997, believes getting the selection spot on will once again be absolutely crucial to the Lions’ hopes of returning home victorious in 12 months’ time.

"I think the selection of the squad will be critical. It is easy enough to pick 20-25 players but it is the last 10 that are crucial and they are the ones that could make the tour," added McGeechan.

"In the back row, for example, there is fantastic competition for the places and there will be some superb players left at home.

"You start looking at players from October onwards and, in 2009, we didn't seriously look at the final selection until after the Six Nations. You will start off looking at 60-70 players and will whittle it down as time goes on, with the selections evolving all the time until April.

"In the end, though, some of the selections will be gut feeling. Something will be there and you just can't put your finger on what it is but you get a feeling that it is right.

"None of this is written in stone, though, and there are plenty of sleepless nights when it comes to selection."

The same applies for picking the Test team – a job that McGeechan admits is perhaps even harder than selecting the wider squad.

With just five warm-up games before the opening rubber against the Wallabies on June 22, time is at a premium when it comes to a moulding a side capable of beating one of the world’s best in their own backyard.

"Getting that selection right is the biggest challenge for the coaches.

"I have always believed that you have got to give players every opportunity to show what they can do on tour. With so few games before the Test matches, it effectively means you won't be able to name your test team until three days before.

"However, you need to look at different combinations and players and sometimes you just get that feeling that something will work.

"In '09 Brian O'Driscoll and Jamie Roberts emerged and they went on to be the best centre pairing in the world that year. You don't see something like this until the players get together and are given that opportunity."