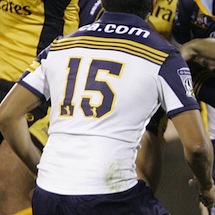 The fullback-cum-wing had a year remaining on his Super Rugby contract with the Brumbies but has been released early.

"Cam is a popular member of the Brumbies squad and it's a shame to see him head back to Sydney, " said Brumbies head coach Jake White.

"Unfortunately things haven't worked out for him in Canberra, but with a fresh start in Sydney I'm sure he will have a successful career.

"Cam grew up in Sydney, his family are all still there, including his girlfriend so it's understandable that he was interested in taking an offer from the Waratahs.

"I'd like wish Cam all the best in the future, both on and off the rugby field.”

Crawford arrived in Canberra in 2011 and was rewarded with a two-year contract after impressing within the set-up.

He made his Super Rugby debut against Western Force in 2012 but has had limited opportunities so show his potential.

Both the Brumbies and Waratahs face the Lions in the build up to the Test series with Australia next year and Crawford could yet face the famous tourists.