Greig Laidlaw insists Scotland aren't getting carried away with an historic summer. [more] 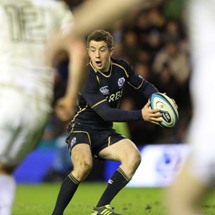 Greig Laidlaw insists Scotland aren’t getting carried away with an historic summer.

The Scots won all three Tests on their tour of the southern hemisphere as they proved the most successful of the Home Nations last month.

A shock victory over reigning Tri Nations Champions Australia was followed by back-to-back wins over Fiji and Samoa as Andy Robinson’s men ended a frustrating season on a major high.

Scotland had lost seven games in a row between September 2011 and March 2012 – a run that included being knocked out at the group stages of the World Cup for the first time in their history and a first winless Six Nations in eight years – yet they head into the new campaign in positive mood.

The 9-8 victory over the Wallabies in Newcastle, New South Wales was a huge boost for the rugby in Scotland, as was the form of domestic sides Edinburgh and Glasgow. Edinburgh reached the semi-finals of the Heineken Cup while Glasgow achieved the same feat in the RaboDirect PRO12.

Recent progress means Scotland head into Lions year on a high but Laidlaw knows a strong start for both club and country is vital if he and his team-mates want to push on towards their potential.

“There is a breath of energy around but we’ll not be getting too excited, we’ll take one step at a time,” said Laidlaw, who took over from Dan Parks as Scotland’s first-choice fly-half in the Six Nations and has just been appointed Edinburgh captain for a second successive season.

“We were just delighted to win the three tests but that’s history now and we’re looking forward.

“The players in the squad just now are in a good place just and hopefully, if Edinburgh and Glasgow get off to a good start and the exiles do well wherever they are, Scottish rugby will be in a good place again.

“We’ve got the All Blacks first up in November and the way they played in their summer tests showed they will be a tough test for us.

“They are absolutely world class and we will have to be on our guard in that first Test.”