No crisis in WA

The man in charge of the Western Force insists Australia's second-newest franchise aren't in crisis. [more] 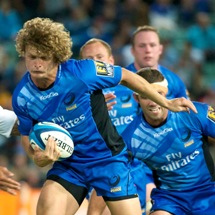 The man in charge of the Western Force insists Australia’s second-newest franchise aren’t in crisis.

The Perth-based outfit have just lost star skipper David Pocock after the influential openside decided not to renew his contract at the nib Stadium.

That setback comes on the back of a lengthy delay to find a new coach after Richard Graham opted to move to Aussie rivals the Reds.

Former Leinster boss Michael Cheika reportedly turned down the chance to take over earlier this month and attempts to prize ex-Bath hooker Michael Foley away from his post at the Waratahs are dragging on and on.

All this follows the recent retirement of ‘Mr Force’, veteran second row Nathan Sharpe, and the departure of Wallaby utility back James O’Connor, who signed for Melbourne Rebels this time last year.

But the team’s CEO, Vern Reid, insists the Force aren’t in decline despite media claims to the contrary Down Under.

"Everybody clearly wants something happening, changes to be made, starting with me," said Reid, who is heading a complete review of club operations and a detailed look at last season's disappointing 14th place finish in the Super 15 table.

"I'm not being besieged by sponsors or groups of members. There is no flight of sponsorship.

"If we had not lost a coach and won three more games, been able to win the tight games, we probably would not be in this position.

"Yes, we have lost the one bloke we really wanted to hang on to but there are a lot of guys who have made a commitment, a whole lot of guys like Matt Hodgson, Ben McCalman, Richard Brown and others.

"Losing David is a blow but we did all we could to keep him. I don't know what else we could have done.

"Many things within the club are solid. Membership is the second best in the country, we have retained the majority of our senior players, we have very good sponsorship. There are many positives.

"Some people may see it as a club in crisis. We are a long way from that."

The Force are the first of the five Australian franchises to face the Lions next summer, with Britain and Ireland’s elite in town on June 5, four days after they kick off the tour against the Barbarians in Hong Kong.