David Campese reckons Wales will provide the bulk of the Lions squad to tour Australia next year. [more] 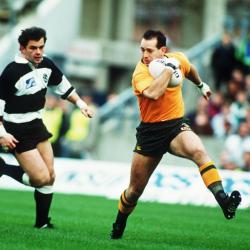 David Campese reckons Wales will provide the bulk of the Lions squad to tour Australia next year.

The Wallabies legend has kept a close eye on Wales in recent months with the Grand Slam champions falling to five consecutive defeats to the Men from Down Under.

But Campese reckons Wales should have won some of those matches and expects to see the majority of Wales' squad during next year's tour, in particular former Lion Leigh Halfpenny.

"It should make for a very tight Lions series," said Campese.

"I expect the majority of the Welsh team will feature in the Lions squad. Halfpenny was very solid under the high ball and looks a certainty for the Lions. He’s a great goal-kicker too."

Wales have fallen to five consecutive defeats to the Wallabies in the past 10 months and the two sides meet again at the Millennium Stadium in December.

'Campo' insists the Dragons must take their chances and combat Wallabies flanker David Pocock if they are to have a chance of ending the drought.

But he is confident the Wallabies will be even better following their involvement in the inaugural Rugby Championship.

"Wales played a slightly under-strength Aussie side and blew the opportunities in front of them," said the Wallabies legend.

"Wales have the players but sometimes lack that cutting edge. They failed to deal with Pocock and it ultimately cost them. The Welsh need to commit more men to the breakdown to generate quick ball.

"After losing the first Test convincingly, Wales should have possibly gone on to win the series. The Australians showed, in the third Test, how to close a game down.

"If you watch the All Blacks play they are always in control. If Wales play that way they will start to win against the southern hemisphere. They will earn respect by playing hard.

"But the Aussies will improve after their Championship campaign. That should make for a fantastic autumn series."

Campese scored a record 64 times in 101 Tests on the wing for the Wallabies and reckons Wales must get a much ball as possible to their powerful wide-men George North and Alex Cuthbert, who have both been tipped for involvement with the Lions.

"Wales need to give North and Cuthbert more ball. There needs to be less kicking," added the 1991 World Cup winner.

"The Welsh backs showed plenty of promise. They are a threat and they need to play the Welsh way. They need to get players to think for themselves, see space and utilise good skills."