Lions tourist Barry Williams has taken his next step on the coaching ladder. [more] 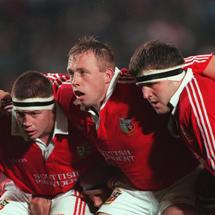 Lions tourist Barry Williams has taken his next step on the coaching ladder.

Williams, who toured South Africa with the victorious 1997 Lions, has been appointed coach of Welsh outfit Carmarthen Athletic.

The former Ospreys captain previously spent time coaching at Llangennech and Llandeilo having retired from the playing side of the sport in 2008.

Williams won 24 caps for Wales between 1996 and 2002 and played four times for Sir Ian McGeechan’s Lions 15 years ago.

Now his intention is to coach in the Welsh Premiership at some point in the future but first he hopes to seal promotion from to the newly-formed Championship with his current club.

"When this opportunity came along, I wanted to take it right away," Williams, who was born in Carmarthen, told the Carmarthen Journal.

"It's a club I've wanted to join before, so I was delighted the chance came.

"I had other offers to join clubs in higher leagues. But I'm keen to start lower down and work my way up. I like to think of this job as my coaching apprenticeship.

"My aim is to coach in the Premiership one day, but I want to earn my chance. I want to work my way up through the leagues. Then I'll develop as a person as well as a coach."

Athletic finished third in the Swalec WRU Division 1 West last season but missed out on a spot in the new second-tier of Welsh rugby.

Williams knows promotion at the first time of asking will be a tough task but he is confident the club have the potential to push on.

"This is a club with huge potential," added Williams.

"Carmarthen Athletic are looking to go back to their old ways of developing lots of local young talent, and I'm looking forward to working with the youngsters here.

"The youth team won the Welsh Youth Cup last season, so the potential of this team is there to see.

"There are a lot of promising players here, and I'm excited about helping their development. Working with any players gives you a buzz, but it's particularly good when you get to work with youngsters.

"The highest we can go is the Championship, so that's what we're aiming for."