Michael Foley insists he is relishing a different type of coaching role after taking over at the Force. [more] 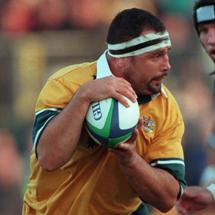 Michael Foley insists he is relishing a different type of coaching role after taking over at the Force.

Former Bath hooker Foley left his post as head coach at the Waratahs on Monday to move to Perth but the 45-year-old has been handed a different role at his new franchise.

Foley will delegate a large portion of the day-to-day coaching to his yet-to-be-named senior assistant as he controls the broader rugby programme.

The position will be akin to a director of rugby role but Foley isn’t at all concerned about putting his faith in a wider coaching team.

"Taking a step back is not a problem for me," said Foley, who played against the Lions for the Wallabies back in 2001 and will now face Britain and Ireland’s elite with the Force on June 5 next year.

"I like the thought of being able to lead the program and to be responsible for the outcomes.

"It's uniquely different to what I was doing at the Waratahs. The Waratahs was very much on the field only. There'll be both aspects to the role here.

"I'll be hands on with the team, but we want to leave the door open for the best possible candidate to lead our attacking game.

"We need somebody with experience and definitely a proven track record that they can coach the type of game that we want.

"The thing I want here is success for the team.”

Forwards coach Nick Stiles is staying with the Force but backs coach Phil Blake has moved on.

Ex-Ireland boss Eddie O’Sullivan is among those who have been linked with a post at the Nib Stadium, although John Mulvihill, who was among the applicants for Foley’s post, also remains in contention.

Whoever joins Foley on the west coast will have a stiff task ahead of them, though.

The Waratahs may have lost their last eight games of the Super 15 season but the Force were Australia’s bottom-placed side, finishing a frustrating 14th in their seventh Super Rugby campaign.

Foley knows his new job won’t be an easy one and he admits the decision to leave Sydney for a new challenge despite having one year left on his Waratahs contract was equally difficult.

"The decision for me has been something I've anguished over for a couple of weeks," added Foley.

"It's not easy to leave a team you love coaching, but the players and management of that team and people that are close to me understand the reasons for that.

"This is an important period for the Force and, while we’re not looking to start from scratch, we’re looking to re-launch the team.

"There’s no doubt the club has had a few setbacks in recent times but there are many people at the club, both on and off the field, that are very determined to see the Force successful.

"While my expectations are realistic, I’m very excited about this challenge. The coaching staff will be looking to promote an exciting brand of rugby that captures the imagination of our fans and wins games as well."