Adam Jones is hopeful he will be celebrating a second successive Lions tour next summer. [more] 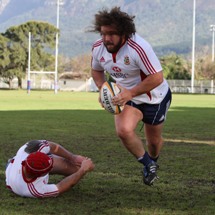 Adam Jones is hopeful he will be celebrating a second successive Lions tour next summer.

The star tighthead impressed in the Test series with the Springboks three years ago and has now set his sights on making the plane to Australia in 2013.

Jones’ is one of the favourites for a starting spot against the Wallabies and, even though he isn’t taking anything for granted, he’s quietly confident about pushing his clams for selection this season.

“Touch wood, it will work out like that. I hope so. That’s what I’m going to try to do,” said Jones, speaking after his testimonial game in Neath last weekend.

“There’s a lot of hard work between now and then, a lot of things that need to go right such as form and fitness, but, fingers crossed, they’ll go okay and there’ll be another trip.

“It’s a tough ask. There are a lot of good tight-heads out there now. It’s quite competitive and it will be tough, but I’m confident I’ll do it, form and fitness permitting.

“The last couple of years have gone all right for me. To be fair, I’ve been pretty happy with my form since 2008 or 2009. It’s a case of carrying on now and going from there.”

Jones played all three summer Tests against the Australians as Wales were narrowly beaten in Brisbane, Melbourne and Sydney.

Defeat in the third and final rubber in late June was the fifth time in 10 months that the Grand Slam Champions had failed to get the better of the Wallabies and the 31-year-old is keen for that stat to change.

His first chance to redress the balance comes when Wales host Will Genia and co in December, six months before he hopes to head Down Under with Britain and Ireland’s elite.

“They’ve been a bit of a pain in the backside for us but hopefully we’ll kick on a bit,” added Jones.

“They are definitely beatable, but you have to look after their main threats like David Pocock. We didn’t do that with Wales, and he’s massive for them. He played havoc with us.

“The criticism the Australian front row get is quite harsh. They’re not half as bad as people make them out to be.

“A lot of media guys base it on a couple of scrums against England in 2006 or 2007, but since then boys like Benn Robinson, Ben Alexander, James Slipper, Stephen Moore and Tatafu Polota-Nau have shown they’re really good players and you can’t take them lightly.”