Quade Cooper is warning the Wallabies not to abandon their attacking flair in the build up to next summer's Lions tour. [more] 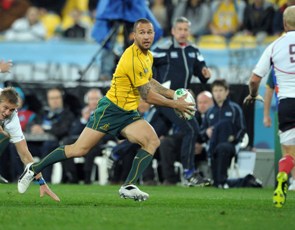 Quade Cooper is warning the Wallabies not to abandon their attacking flair in the build up to next summer’s Lions tour.

Cooper and co produced some scintillating rugby on their way to a first Tri Nations triumph in a decade last season but have since struggled to reproduce that form in the 2011 World Cup and the inaugural Rugby Championship.

But despite a series of error-strewn showings in recent months, Cooper is worried that a conservative approach will simply persuade fans to follow a host of other sports and leave the Wallabies slipping further down the pecking order both on and off the field.

The 24-year-old playmaker became the latest leading Wallaby to be sidelined through injury this week but he has spoken out after widespread criticism of his own performances this term.

Cooper’s disappointing display in last Saturday’s nervy win over Argentina led head coach Robbie Deans to suggest he might drop his maverick outside-half to the bench even before his injury setback but the Reds star makes no apologies for his own all or nothing approach.

"I know we're competing against a lot of other sports in this country. If people want to go out there and play a boring brand of football then there's other guys they can pick to do that," said Cooper, who will have minor knee surgery on Friday.

"I don't want to walk off the field wondering whether I should have tried this or tried that. That's where you get the confidence from as a team because when things come off you feel 10-feet tall. That's something I'm really passionate about.

"I just put (the errors) down to the fact I'd rather go down swinging and try and make our attack work. It's the only way we're going to beat the All Blacks.

"I'd much rather go down swinging and throwing the punches to put yourself in a winning position than come out saying we kept it close. It's okay if you come close but it's not if you never look like beating them."

Deans is set to pick either Berrick Barnes or Kurtley Beale in the No10 shirt for the clash with South Africa in Pretoria a week on Saturday and Cooper hopes his head coach opts for the latter.

"Kurtley'll want to try and spark things and take the game on," added Cooper.

"That's what I saw my role as – to attack the game and try and make it a brand of rugby that people want to watch."