Cusiter out until mid December 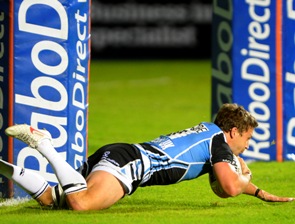 The Glasgow scrum-half will be out of action until mid December as a result of a dislocated shoulder.

Cusiter, who toured New Zealand with the Lions in 2005, suffered the setback in his club's RaboDirect PRO12 win over the Ospreys in Swansea on Friday night.

The damage is not as serious as at first feared but the 30-year-old will still be sidelined for close to two months in total.

"Everyone at Glasgow Warriors is disappointed that a quality player like Chris Cusiter is likely to be out of action until around the middle of December," said Glasgow head coach, and 1997 Lions hero, Gregor Townsend.

"It's encouraging, though, that he doesn't need surgery, and we know he's in the best possible hands with our medical team.

"Chris is a tough competitor, and he'll be working hard to return to fitness and make a significant contribution to our campaign."

As well as missing at least eight PRO12 games and as many as four Heineken Cup ties, Cusiter will be unavailable for all three of Scotland's November internationals.

The former Borders and Perpignan No9 won the most recent of his 63 Scotland caps in the summer win in Samoa but won't feature against New Zealand and South Africa at Murrayfield or Tonga at Pittodrie.

"It's disappointing for Chris because he has made such a good start to the season. I wish him a speedy recovery," added Scotland head coach Andy Robinson.

Fellow Lion Mike Blair is now the front runner for the scrum-half berth against the All Blacks on November 11, especially now that Rory Lawson is plying his trade in the RFU Championship with Newcastle Falcons.