Fresh start for Ford and co 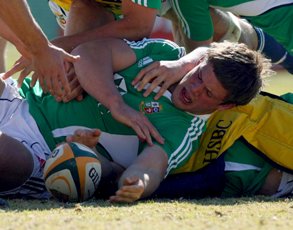 Glasgow lost to Northampton and Ulster in European competition over the past fortnight while Ford’s Edinburgh were thrashed 45-0 by Saracens and 33-0 at Munster.

But Ford hopes he and his international colleagues can put those results behind them when they meet up at St Andrews to begin their preparations for the November 11 encounter with New Zealand at Murrayfield.

“Players would prefer to come in off the back of a few wins, but playing for your country is an honour so you go there and start afresh,” said Ford, who won a Lions Test cap in the win over South Africa in Johannesburg three years ago.

“It’s a different scenario with different coaches. It’s almost like a fresh start. (It’ll be) new boys working together. You just get on with it.

“You haven’t seen them (the other players) for a while. You’re working to different systems and…you focus on the positive and look at what you can bring to the table.

“You don’t go into any games being negative. You want to show what you can do. It does not always happen but there is no point your bottom lip tripping you.

“You have to find a way to fix things, there is no point dwelling on the negatives for too long.”

The national side also endured plenty of negatives in 2011 and early 2012 but the summer tour of the southern hemisphere has brought an altogether more upbeat outlook on life under Andy Robinson.

A shock victory over Australia was followed by back-to-back successes against Fiji and Samoa as the Scots showed their true potential having lost all five matches in the RBS 6 Nations.

Those three away wins in a row were undoubtedly a confidence boost but Ford is at pains to explain that there is no intention to rest on their laurels prior to the November Tests against New Zealand, South Africa and then Tonga.

“We cannot stand still and admire what we have done. We will gather at St Andrews to set the bar higher again,” added Ford.

“In the autumn Tests, we come up against world-class opposition. What we did on tour will not be good enough to put pressure on the All Blacks.

“We have to lift it again and look at ways to improve.”