Ireland flanker Peter O'Mahony says the performance of the country's young guns in the win over Fiji was 'a joy to watch' that has given the whole squad a boost. [more] 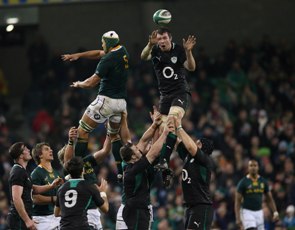 Ireland flanker Peter O’Mahony says the performance of the country’s young guns in the win over Fiji was ‘a joy to watch’ that has given the whole squad a boost.

A host of up and coming talent impressed in the 53-point thrashing of the South Sea Islanders last Saturday as Ireland put the opening autumn defeat to South Africa behind them in some style.

And while much has been made about a possible over reliance on the likes of Lions veterans Paul O’Connell, Brian O’Driscoll and Ronan O’Gara and co, 23-year-old O’Mahony says the attitude of the next generation is already having a major impact on the Irish camp.

"Every team goes through a stage where younger guys come in and are knocking on the door," O'Mahony, told the official Ireland rugby site IrishRugby.ie.

"We're lucky enough to have a big group coming through at once. I think it's given everyone a lift. Even the older fellas are getting a kick and a buzz out of the younger fellas being around and adding their two cents to training.

"When new guys come in, it brings a different perspective to things. Rugby is always evolving and to have guys who see things differently is great for everyone.

"I'm sure Declan (head coach Declan Kidney) is learning off some of the young fellas as much as Donners (Donncha O'Callaghan) is and ROG (Ronan O'Gara) and Jamie (Heaslip) and the guys who have loads of caps.

"It's great for everyone to have that level of competition, everyone wants to win in a Test jersey and they push each other on.

"And that Fiji performance, it was really positive. The lads playing really gave everyone in the squad a lift."

Ireland face Argentina at the Aviva Stadium on Saturday looking to carry on the good work from last weekend’s non-cap international in their final match before the Six Nations.

Munsterman O’Mahony will hope for a starting berth having played for 70 minutes against the Boks before being rested against Fiji and he’s ready for a huge battle if he does get the nod to start in Dublin.

"It's going to be physical. Argentina have a big pack, they've a world class back row with (Juan Manuel) Leguizamon and (Juan Martin) Fernandez Lobbe. Their maul is very dangerous and they've a good lineout," added O'Mahony.

"As a 15 we're going to have to front up. They're a very potent side. Since they've got into the Rugby Championship they have really improved. Even in its first year, they've come on in leaps and bounds and it's really helped them.

"They haven't gone away from that physical team they were – what they are known for being good at – but they've added other things and it's made them more of a rounded team.

"We're just going to look for a physical performance from 1 to 15. The breakdown is where international games are won these days and that's where we are going to be focusing on. Not just 1 to 8, not just the pack, it's a backs issue now as much as a forwards one."

The Leinster star is considered a serious contender for a Lions Test spot in Australia next summer but he hasn’t played any rugby since his country’s summer series in New Zealand.

Having sat out eight domestic fixtures, two European clashes and Ireland’s autumn campaign, O’Brien is under consideration for his province’s PR012 tie at Glasgow on Friday, although the following week’s home match with Zebre may be a more realistic target.