Wallabies can shine week after week

Wallaby flanker Michael Hooper insists his side are capable of reproducing the level of performance they displayed against England when they meet Italy this Saturday and Wales a week later. [more] 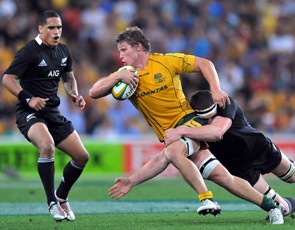 Wallaby flanker Michael Hooper insists his side are capable of reproducing the level of performance they displayed against England when they meet Italy this Saturday and Wales a week later.

Hooper picked up the man of the match award with another strong individual showing against the country of his father’s birth as the Wallabies bounced back from defeat to France last time out.

Lions coach Warren Gatland has since spoken of just how big a danger the Aussies pose when the Lions travel south next summer and Hooper is convinced their Twickenham triumph won’t just be a flash in the pan.

“We’re capable of performances like that every week,” said Hooper.

“There’s no science to it. It’s just turning up and producing an 80-minute performance. Getting that consistency is the key. We’re good enough to do that every week.

“That was a big week for us coming off the France game but our focus was on England.

“This group’s been here before. We were back here in South Africa (after Australia lost 31-8 to the Boks in Pretoria) so it isn’t anything new to us. We took a lot from that. The boys stuck together and put out a good performance.”

The continued absence of fellow openside David Pocock ensures Hooper starts against the Azzurri in Florence for the third of Australia’s four tour games but head coach Robbie Deans hasn’t ruled out starting the pair alongside each other for the December 1 encounter with Wales.

There has been plenty of paper talk about Hooper and Pocock playing left and right rather than open and blindside and, with no one having cemented the No6 spot this season, it’s possible that the pair could feature together in Cardiff and when the Lions arrive in Brisbane, Melbourne and Sydney.

“If he does ever miss out, it won’t be off the back of his performance, that’s for sure,” said Deans.

“He’s had a huge year. Not only in Super Rugby but in Test rugby as well.

“He just keeps putting it in, keeps turning up and keeps impressing his mates.”