The 2017 British & Irish Lions were treated to a truly unforgettable Maori welcome at Waitangi Treaty Grounds on Sunday morning. [more] 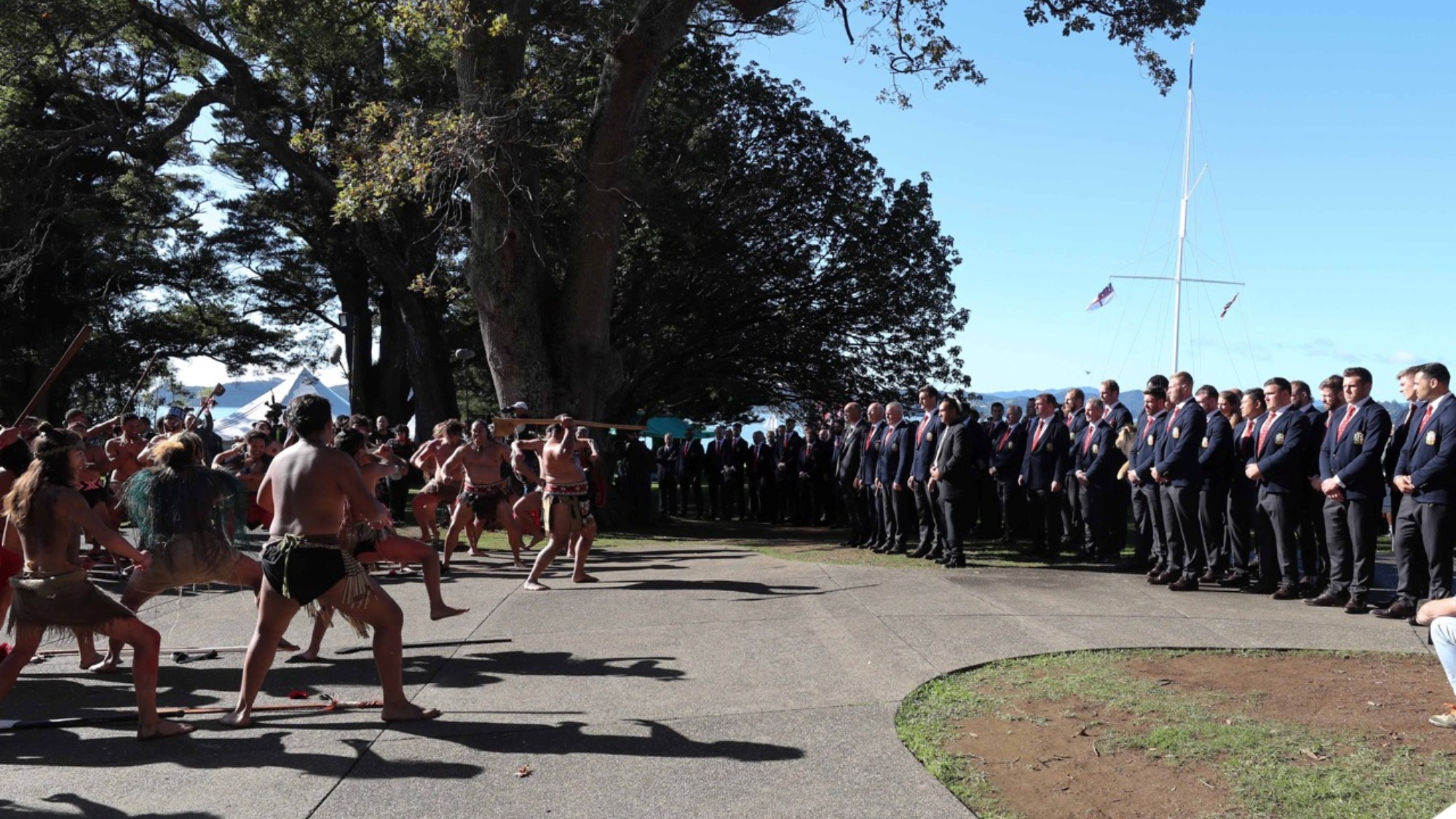 In glorious sunshine more than 400 warriors, mainly Ngāpuhi, both male and female, received the Lions with a spectacular Pōwhiri on the grounds that are the birthplace of New Zealand as a country.

During the welcome, the tourists – who began their six-week ten-match Tour with a win on Saturday against the NZ Provincial Barbarians – received three challenges.

The first, in front of ceremonial war canoe Ngātokimatawhaorua, was a private challenge for the Lions squad with the wero – or ceremonial spear – accepted by Tour Manager John Spencer.

“It was an absolutely fantastic ceremony and a wonderful welcome by the Maori people here,” said Spencer.

“It couldn’t have been a better day for it, and we have great respect for their traditions, for their culture, their language, their heritage – which started here of course, their haka and of course their harmonies.

“It has been an absolute privilege. This is not a ceremony that has been extended to very many people.

“We were determined to come here and show our respect and our friendship – two of the Lions core values.”

An incredible welcome for us at the Waitangi Treaty Grounds.

Following the first challenge, the Lions made their way to the crest of the hill on the Treaty Grounds and, with thousands of fans in attendance, faced down the second challenge.

This time it was Tour Captain Sam Warburton who received the ceremonial wero.

“We had quite a few Maori welcomes for the 2011 Rugby World Cup and Wales toured here last summer as well, but that was like nothing I have ever experienced before,” said the Wales flanker.

“It was brilliant, and the day and the setting made it even more special.

“Away from the field, that is probably one of the best experiences I have been able to have through rugby.”

The third and final challenge was in front of Te Whare Rūnanga, before the 41-man playing squad and backroom staff were granted entry for ceremonial speeches and further traditional Hongi greetings.

“All the players have come out of there pretty quiet, but more in awe of what has just happened – it was really special,” added Warburton.

And the Lions choir, after hours of practice in training camp, delivered all four of their songs in fine style, with the Welsh hymn Calon Lan the real showstopper according to the skipper.

“The choir delivered, we were good in there,” added Warburton.

“We have put a lot of practice in behind closed doors and it has been good fun from a bonding point of view and we have had a laugh.

“But the guys have also actually really bought into it and from the English, Irish and Scottish boys point of view, to learn Calon Lan is really impressive.

“The Welsh guys were thinking ‘Crikey, this is going to be difficult’, so to learn it and buy into it has shown how the lads have come together off the field.

“We must have had at least 10-15 choir practices and hopefully paid off in there.”

Our thoughts and deepest sympathies go out to those affected back home by the tragic events in London. pic.twitter.com/jNjpQ7vJYy

Warburton also spoke of the attack that hit London overnight, explaining that the Lions players and management were thinking off all those caught up in the incident.

He said: “The guys have woken up to some news of some unfortunate events that happened in London today.

“I just wanted to wish those involved all the best wishes from the Lions players and management and just that our thoughts are always with the people back home in Britain and Ireland.

“Our thoughts and deepest sympathies go out to the families and people involved in that incident.”

New Zealand News
Previous story Lions Scout: Blues and Crusaders on form ahead of Lions encounters
Next story Blues team named to take on the Lions