Leicester centre Dan Hipkiss has been called into the England squad for next month's New Zealand tour. [more] 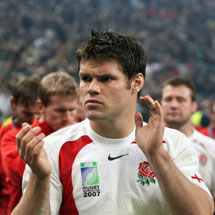 Leicester centre Dan Hipkiss has been called into the England squad for next month’s New Zealand tour.

Hipkiss replaces fly-half Danny Cipriani, who faces six months on the sidelines after suffering a fracture dislocation of his right ankle during Wasps’ Guinness Premiership play-off victory over Bath on Sunday.

England manager Martin Johnson has opted not to fill the tour vacancy with another stand-off.

Charlie Hodgson, Olly Barkley and Toby Flood, who were named in the 32-man squad last week, are all candidates for that role in the first Test against New Zealand on June 14.

Hipkiss, though, has leapt into contention despite originally failing to make either the senior group or the England Saxons squad for their Barclays Churchill Cup campaign in the USA and Canada.

Johnson could have promoted the likes of Gloucester fly-half Ryan Lamb, his club colleague Anthony Allen or Wasps’ Dominic Waldouck from Saxons duty, but he has opted for Hipkiss.

He was used off the bench in vital pool stage victories over Samoa and Tonga, then replaced Josh Lewsey during the semi-final win against host nation France before going on for Jason Robinson in the final, when England lost 15-6 to South Africa.

“We all agreed there was good cover at fly-half with Charlie Hodgson, Olly Barkley and Toby Flood, and so we decided to go with Dan.

“He gives us further options at centre and he has been playing well for Leicester Tigers in recent weeks. He deserves his chance.”

Hipkiss said: “I obviously cannot help but feel for Danny and the injury he has suffered, and my thoughts are with him.

“However, this gives me a chance to tour New Zealand and it will be a very tough and challenging environment.

“The Rugby World Cup last year will hold me in good stead and it is an opportunity I am looking forward to.”

Before heading to New Zealand, Hipkiss faces a Premiership final showdown with Wasps at Twickenham when the Tigers aim to defend their title.

Cipriani, meanwhile, is expected to be released from hospital tomorrow following an operation on Sunday night to repair ankle damage.

He is battling to play again this year and is also set to miss England’s November Tests against the Pacific Islanders, South Africa, Australia and New Zealand.