Lions are ‘So Special’ – Howley

Wales assistant coach Rob Howley is encouraging his players to do all they can to become a part of a very special return trip to South Africa next summer. [more] 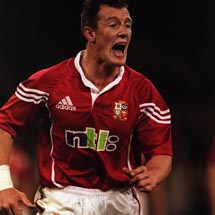 Wales assistant coach Rob Howley is encouraging his players to do all they can to become a part of a very special return trip to South Africa next summer.

The former Cardiff, London Wasps and Wales scrum half made the first of his two British & Irish Lions tours to South Africa in 1997 and he wants to see as many of his Grand Slam 2008 outfit taking a starring role against the Springboks in 2009.
Howley saw his side beaten 43-17 in the first of their two Prince William Cup clashes with the world champions in Bloemfontein last weekend and is now looking for a much improved performance at Loftus Versfeld on Saturday.
“Being a part of a Lions tour is so special, whether they are touring New Zealand, Australia or South Africa, although because of the huge history between the Lions and the Springboks going to South Africa adds a little bit extra,” said Howley.
“Touring was a bit longer back in 1997 and we became one big family. I was privileged to be a part of it for five weeks before a shoulder injury ended my tour against Natal. Anyone who has seen the video ‘Living with the Lions’ could see what it meant to me to be leaving the tour.
“During those five weeks I was there everything was so exciting. You never knew if you were going to be in the midweek team or part of the Test outfit, which kept everyone on their toes.
“Under Ian McGeechan and Jim Telfer we prepared fantastically well. Geech is a very good selector who, having played for the Lions, fully understands what it means to play for the team.
“He understands the dynamics of blending players from four countries into one team. Probably more than anyone else he understands the roles and responsibilities that come with playing for the Lions.”
Having suffered the agony of missing out on the winning test series against the Springboks in 1997, Howley made a second tour to Australia in 2001 under his Welsh coach, Graham Henry. This time he figured in two Tests, before injury once again ruled him out of the third.
Now he wants to encourage as many of his players to push for the “ultimate honour” in British & Irish rugby and bid for a place on the 2009 tour to South Africa.
“Geech came to a training session and we have told all the players that he was coming to look at them in this series,” said Howley.
“I know a year is a long time in professional sport – just look at what happened to Eddie O’Sullivan – but they have to maintain the highest standards in order to try to become a Lion.”