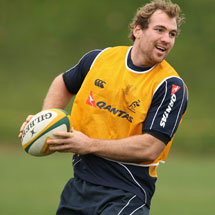 The 25-year-old, who currently has 33 international caps to his name, has signed for Magners League Champions Leinster on a one-year deal.

Elsom will join the Irish outfit in September having been granted an early release from his contract with the Australian Rugby Union on compassionate grounds.

"As it stands now, we hope to have Rocky back in Australia by the middle of next year," said ARU chief executive John O’Neill.

"This was a specific request and we looked at all the factors involved. He took us into his confidence and this remains a confidential matter between Rocky and the ARU.

“What we can say is that we have offered Rocky valuable advice moving forward. We also factored into the equation that not giving him this assistance, in the form of an early release, meant we could have lost him to Australian rugby permanently."