Wales No 8 Gareth Delve's chances of pushing for selection for next year's British & Irish Lions tour to South Africa have been dealt a bitter blow. [more] 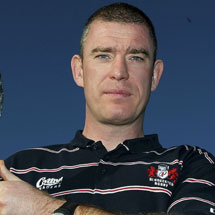 Wales No 8 Gareth Delve’s chances of pushing for selection for next year’s British & Irish Lions tour to South Africa have been dealt a bitter blow.

But his club coach Dean Ryan is backing his man to return to action as good as new once he has undergone surgery.
Having twice tangled with the world champions this summer in the Prince William Cup series, the Gloucester back rower was hoping to push his way into contention for Ian McGeechan’s initial 65-strong training squad at the start of the new year.
But an injury to an anterior cruciate ligament in his knee sustained in Wales’ second Test defeat in Pretoria is threatening to keep him out of action for between six and eight months.
It is the third major knee injury Delve has suffered in his career, the last one forcing him out of the running for the 2007 Rugby World Cup. A should injury has previously cost him a chance of going to Australia with Wales for the 2003 World Cup.
The 25-year-old is set to undergo surgery on 9 July and hopes to be back in action early in the new year.
“Gareth is a tremendous individual and an outstanding player – someone we wanted to build around for the future,” said Gloucester director of rugby Dean Ryan..
“This injury is obviously a significant set-back to him and the club, but I have no doubts he will be back in Gloucester colours next season. He has drive, determination and a willingness to succeed and I am sure that will come through in his recovery.”
Delve made his first start for Wales in the second Test in Pretoria have won all six previous caps as a replacement. Having first played for Wales in a non-capped match in 2003 against the Barbarians, he had to wait a long time to get his chance.
He made 20 appearances in all competitions for Gloucester last season following his summer move from Bath.