Next season's Guinness Premiership Final will take place on Saturday, May 16, therefore avoiding any potential clash with the 2009 Lions tour. [more] 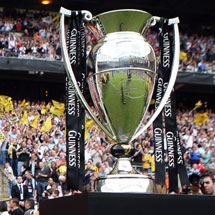 Next season’s Guinness Premiership Final will take place on Saturday, May 16, therefore avoiding any potential clash with the 2009 Lions tour.

That date, which was confirmed this morning, means there will be a two-week gap between the showpiece to the English season and the first game of the 2009 tour.

The Lions are due to play a Highveld XV in Royal Bafokeng on Saturday, May 30 in their first match of a 10-game tour. Last year’s Guinness Premiership Final between London Wasps and Leicester Tigers didn’t take place until May 31st but the presence of the Lions tour has been taken into consideration when arranging next season’s fixture list.

The Guinness Premiership will kick off on the weekend of September 5-7, with the final round of regular fixtures taking place on Saturday, April 25.