Two of the South African sides due to face the Lions in 11 months time go head-to-head in the ABSA Currie Cup this Saturday. [more] 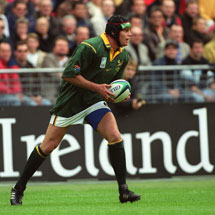 Two of the South African sides due to face the Lions in 11 months time go head-to-head in the ABSA Currie Cup this Saturday.

While the Springboks are in Wellington for their Tri Nations opener against the All Blacks, Western Province host the Cheetahs at Newlands Stadium in Cape Town.

Both sides play the Lions within a week of each other during the 2009 summer tour, with the Cheetahs the first to tackle Ian McGeechan’s men on June 6 and Western Province taking their turn on June 13.

The reigning Currie Cup champions, the Cheetahs currently sit in second place in the standings as one of only two unbeaten teams, while their opponents on Saturday are just two places below them in fourth spot.

Western Province are currently coached by former Springbok Rassie Erasmus, a flanker who made his international debut in the Third Test victory over the Lions on July 5 1997.

“Because we know so much about the Cheetahs I’ll say that it is going to be an intriguing clash,” said Erasmus.

Now just 59 points short of over-hauling André Joubert in fourth place in the overall Currie Cup points-scoring stakes, Western Province fly-half Willem de Waal is also the early-season favourite to end 2008 as the leading points-scorer in South Africa’s premier domestic competition. If De Waal achieves that feat, it will be the fifth time in a row that he has ended the season as the top points-scorer in the Currie Cup.

Brothers Francois and Flip van der Merwe of Western Province and the Cheetahs respectively are set to oppose each other at lock, should Francois come on as a replacement on Saturday. The Van der Merwe’s are the sons of former Bok strongman Flippie who played six Tests in the 1980s.