The issue of scrummaging techniques is likely to be brought to a head once more when Peter de Villiers and Graham Henry meet referee Matt Goddard 24 hours before this Saturday's Tri Nations clash in Dunedin. [more] 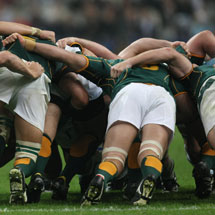 The issue of scrummaging techniques is likely to be brought to a head once more when Peter de Villiers and Graham Henry meet referee Matt Goddard 24 hours before this Saturday’s Tri Nations clash in Dunedin.

De Villiers, who made public comments regarding the All Blacks’ scummaging tactics after last weekend’s 19-8 defeat in Wellington, will have a chance to discuss his concerns at a meeting between all three parties this Friday.

The South African head coach had been critical of the way in which All Black prop Tony Woodcock had been binding during the tournament opener and he is expected to at least ask for clarification of Goddard’s stance on the issue.

Following an official telephone conference with the International Rugby Board referees’ manager Paddy O’Brien, it was confirmed that a combined meeting would take place, despite O’Brien having previously dropped the option of pre-Test meetings that used to be open to each team.
"No specific issues were discussed but obviously it has been well-recorded in the media what the issues are regarding the scrum," O’Brien told One Sport.

"But they didn’t get into specifics, they (South Africa) would prefer to speak the match referee and the All Blacks on Friday.

"We don’t want that extra pressure on the referee but if they both meet together they can both go away knowing whatever issues.

"They have been up front and open with each other and the referee will give them an interpretation on how it is going to be blown on Saturday."