McGeechan ‘honoured’ to be Lions’ leader

With the 2009 Lions tour to South Africa now just over nine months' away, Ian McGeechan has spoken of his delight at being asked to take charge of one of the most unique concepts in world sport. [more] 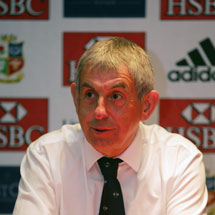 With the 2009 Lions tour to South Africa now just over nine months’ away, Ian McGeechan has spoken of his delight at being asked to take charge of one of the most unique concepts in world sport.

The 61-year-old, who has been a Lions mainstay since appearing in all eight Tests as a player in 1974 and 1977, is already looking forward to the challenge that lies ahead, particularly as it is a challenge he never imagined he would be undertaking.

"I didn’t think I’d coach the Lions again," said McGeechan, who led the Lions on three successive tours in 1989, 1993 and 1997, before forming part of Sir Clive Woodward’s coaching staff on the 2005 tour to New Zealand.

"To have another opportunity is fantastic from my point of view. Generally, you only coach the Lions once so to think I’ll have been involved five times as a coach is something I find quite amazing."

McGeechan’ success rate with the Lions is incredibly impressive having secured two series’ victories as a coach and one as a player, with the only glitches coming when the Lions have faced the All Blacks.

Unsurprisingly for someone so steeped in Lions’ folklore, the former Scotland international recognises the responsibility that accompanies the honour of taking charge of the best of the best.

"I was pleasantly surprised and obviously delighted to be asked. The Lions have always meant so much to me.

"It’s safe to say that, if I hadn’t have been director of rugby at Wasps where I’m coaching hands on, I wouldn’t have really considered it as I think it’s very important to be directly involved with the coaching.

"Each tour reflects the coach really. You’ve got certain beliefs on how you see the Lions and everyone wants to be successful. Each coach will do it his way. My way is to try and keep a fairly tight unit with one coaching team, one group of players and to have everyone take responsibility for delivering what we want to do because we only have a short time to do it.

"I’m very honoured that I’ve been given another chance because I do enjoy the Lions environment. It is unique and special for a coach as well as a player so to have that opportunity is incredible."