A good weekend all round

With plenty of live rugby to watch on Friday, Saturday and Sunday, it was a good weekend for rugby supporters across Britain and Ireland, but an even better one for Lions head coach Ian McGeechan. [more] 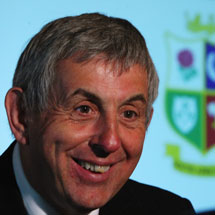 With plenty of live rugby to watch on Friday, Saturday and Sunday, it was a good weekend for rugby supporters across Britain and Ireland, but an even better one for Lions head coach Ian McGeechan.

The man who will lead the Lions to South Africa in nine months’ time witnessed his Wasps side record their first victory of the season on Friday night before seeing a number of familiar and not-so familiar faces press their claims for inclusion on next summer’s tour.

McGeechan guided the Guinness Premiership Champions to their second successive win against Leicester Tigers at Welford Road, a ground where, until last season, they had never been victorious in league rugby.

After trailing 13-6 at the interval, McGeechan’s men clearly heeded his half-time team talk as they turned things around to run out 28-19 winners against last season’s beaten Premiership finalists.

McGeechan’s mood will have been further lightened by the standard of rugby on show throughout the Guinness Premiership and Magners League.

The most well-supported fixture of the weekend took place at the Royal Dublin Showground, where a capacity crowd of 18,500 watched Munster defeat hosts Leinster in a much-talked about all-Irish encounter.

A total of eight Lions were on show in Dublin, with the five Munster tourists finishing happier than their three Leinster counterparts after the Heineken Cup holders recorded an impressive 18-0 win.

O’Gara kicked eight points for the visitors, for whom uncapped full back Keith Earls caught the eye.

2005 Lions skipper Brian O’Driscoll was on show for Leinster, who also featured Shane Horgan and Malcolm O’Kelly, while No8 Jamie Heaslip showed why he is being about as a possible Lion in 2009.

Elsewhere in the Magners League, Welsh regions the Ospreys and Cardiff Blues thrashed Ulster and Connacht respectively, with the likes of previous Lions Shane Williams, Ryan Jones and Gareth Thomas, and potential tourists Tommy Bowe, James Hook and Jamie Roberts all among the try scorers.

Wing Thom Evans starred in Glasgow’s 34-20 win over the Scarlets, with 2005 Lion Stephen Jones contributing half his side’s points with a try, conversion and a penalty at Firhill.

The only Magners League match not to feature a player already having toured with the Lions was arguably the most uneventful of the weekend. Edinburgh full back Chris Patterson, who was deemed unfortunate to miss out on Lions selection three years ago, slotted three penalties against the Newport Gwent Dragons but it wasn’t enough to prevent the Scots from falling to an 11-9 defeat at Rodney Parade.

England youngsters Danny Care and Nick Abendanon were try scorers in the Guinness Premiership, as was Saracens, Wales and Lions No8 Michael Owen, while double-tourist Jonny Wilkinson took over as the leading scorer in Premiership history after kicking Newcastle to victory over Bristol.